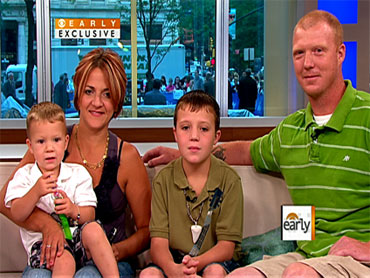 When two-year-old Brendan Hearn was discovered face-down in the family pool in Joliet, Ill., last Thursday, his mother, Tabitha, feared the worst and placed a frantic call to 911.

She then started CPR, but after just a few chest compressions, her nine-year-old, Logan Hearn, intervened.

"My son," Tabitha recalls, "said, 'You're doing that wrong,'" and kind of told me just to move out of the way, and did the procedure like it should be done, and it was working!"

The story gets even more amazing: Logan had a liver transplant when he was 7-and-a-half months old, getting a part of Tabitha's liver. He's also been off anti-rejection drugs for three years, Tabitha told "Early Show" co-anchor Harry Smith, as part of a clinical study.

Tabitha agreed with Smith's assessment that Logan was a "miracle child" to begin with. "Certainly. Without question," Tabitha said.

She described her moment of terror when she realized little Brendan might be in the pool. "I opened the door," Tabitha said, "to see where Brendan was and I noticed my bedroom door was ajar. I looked outside quickly. The dogs were out there. He was not. I screamed for Logan, 'Where is your brother?" He says, 'I don't know.' And the first thing I thought was, 'He must be in the pool.' I ran outside and there he was, in the pool."

After Tabitha began CPR, Logan told Smith, Logan was thinking, "She's doing it wrong. I don't see anything (any water) coming up."

So, he told Smith, he "just kind of shoved her and said, 'Move a little bit."'

Then, says Logan, "I closed his nose, tilted his head back, blew two breaths in, and then pumped his chest, and then I stopped, because water was just pouring out, and a small amount of food."

Logan's father, Brent Hearn, told Smith, "Even as an adult, I don't know if I could do that. I could try to do CPR, but to have that composure, and to have that patience, you know, is just amazing at that age."

Logan added they'll sure "have a story to tell" Brendan when he grows up!

"I just thank god he was there!" Tabitha concluded.

"I was still a little skittish," Brendan admitted, "but I just still went on and did it."