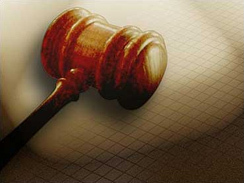 A 10-year-old boy was convicted Thursday in the beating of a homeless Army veteran that left the man so severely injured he required reconstructive surgery.

Prosecutors say the boy, another 10-year-old and Jeremy Woods, 17, ganged up on John D'Amico, 58, as he and a friend walked through a Daytona Beach neighborhood on March 27. D'Amico was beaten and stoned with a concrete block.

Circuit Judge John Watson found the boy guilty of aggravated battery and set sentencing for May 24. The boy, who appeared in court in shackles and an oversized jumpsuit, could be held in the juvenile system until he turns 21 if the judge considers him a habitual offender, or he could be given probation or counseling.

D'Amico, who still has a bandage over his left eye, testified that he never provoked the boys as they claimed.

"The judge saw through the nonsense," D'Amico said outside court. "They need to hold him until he can prove that he'll never do this to somebody else because next time he can kill somebody."

The child's mother left the courtroom visibly upset and refused to comment.

The other 10-year-old pleaded no contest to misdemeanor battery and faces up to a year in juvenile detention when he is sentenced May 24. He has been released to an aunt in Michigan.

Woods has pleaded not guilty to aggravated battery charges and faces up to 15 years in state prison if convicted.

D'Amico has undergone numerous operations since the attack, including reconstructive surgery to his face.