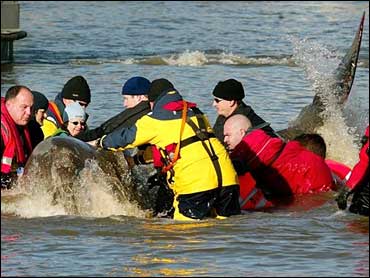 Former heavyweight champion Riddick Bowe pleaded guilty Thursday to abducting his wife and children from their suburban Charlotte home after threatening to use a knife, handcuffs and pepper spray.

He faces a minimum of 18 to 24 months in prison under a plea bargain agreement.

Bowe pleaded guilty to a charge of interstate domestic violence -- the same charge on which he was indicted Tuesday -- but the agreement will give him a lighter sentence than the maximum 10 years in prison and $250,000 fine he could have received, attorneys said. He will be sentenced within 60 to 90 days.

"This is a man with millions of dollars and a great career who is now going to prison," said U.S. Attorney Mark Calloway."That's a big fall."

Bowe was accused of showing up at his wife Judy's home Feb. 25 in Cornelius, a trendy north Charlotte suburb, and forcing her and their five children to accompany him to his Maryland home. She managed to get help in Virginia and did not complete the trip.

Bowe was permitted to go free after Thursday's proceedings. Within 10 days he must post $250,000 secured bond, submit to electronic monitoring and not return to North Carolina without first notifying his wife's attorneys.

During testimony today, investigators said Bowe showed up with duct tape, a knife, pepper spray and handcuffs and threatened to use them. At some point in the ensuing hours, testimony showed, he inflicted a superficial knife wound on Mrs. Bowe's left breast.

Bowe drove about 200 miles before stopping at a fast food restaurant in South Hill, Va., where Judy Bowe was able to get to a telephone and call her sister, Lynette Shaw, in Cornelius, McKinney said.

Shaw called Cornelius police, who alerted their counterparts in South Hill. They went to the restaurant and spoke with the couple. Mrs. Bowe told authorities she and her children did not want to go to Maryland, so South Hill police arranged for them to be returned to their home.

Authorities decided to conduct additional interviews and consult state police in North Carolina and Virginia as well as the FBI before deciding whether to arrest Bowe, McKinney said.

The Bowes, who were high school sweethearts, are currently in divorce proceedings, court testimony showed.