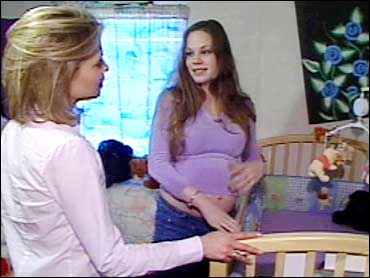 All of the soldiers' families at Fort Benning, Ga., are worried about the life -threatening circumstances that their loved ones are facing overseas.

So the news of a new life takes on added significance around the base. The Early Show Correspondent Tracy Smith spent some time with one expectant mother.

Even before she was born, Brandie Sneed's baby girl was already missing her father. He's the only one, Sneed says, who could quiet her kicks.

"We could tell she was going to be a daddy's little girl because it got so bad that he would put his hand on my belly and go, 'It's time to go to bed, baby girl.' And a couple minutes later, she'd go back to sleep," Sneed says.

When Army Spec. Robert Sneed went to Kuwait in February, he left a room full of baby toys, a closet full of uniforms and a wife who's finding it hard to separate anticipation from dread.

"My biggest fear is having to tell his daughter that her daddy died when she was being born or him not coming home; or him coming home and her not recognizing him, not knowing who her daddy is," Sneed says, noting she thinks about these things a lot.

In Spec. Sneed's absence, the nursery has become a small shrine.

"I put pictures of him on her crib, and then several times a day, I plan on showing her pictures and say "Dada, Dada," so when she finally does get to meet him, she can recognize Dada with his face," Sneed says. But seeing the pictures in the nursery makes her miss him even more.

Robert Sneed's mom and sister do their best to fill the gaps, passing the time by playing the game Risk. Somehow, this bloodless war fought by plastic soldiers is a comfort.

"I think it's kind of weird," Sneed says, "because I'm about ready to bring a baby into this world. And all of a sudden, there are people over there fighting for my child and her future, and their children, their future. So I think it's kind of cool. And yet knowing what a war brings, it's still very traumatic."

And Thursday at 4:58 in the afternoon, Mystayah Angelique Sneed was born. She weighed 7 lbs. 5 ounces, and both mom and baby are doing fine.

And according to reports from the front, Robert Sneed is already handing out cigars to his fellow soldiers in Kuwait.