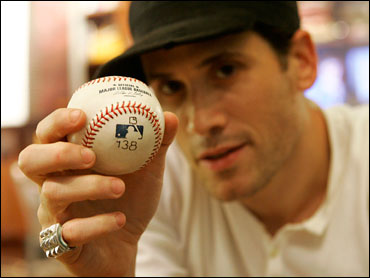 The ball Barry Bonds hit for his record-breaking 756th home run will be branded with an asterisk and sent to the Baseball Hall of Fame, its owner said Wednesday.

Fashion designer Marc Ecko, who bought the ball in an online auction, set up a Web site for fans to vote on the ball's fate, and the decision to brand it won out over the other options, sending it to the museum unblemished or launching it into space.

"We're going to be working with the folks at the Hall of Fame," Ecko said on NBC's "Today" show.

Ecko, whom Bonds called "an idiot" last week, had the winning bid Sept. 15 in the online auction for the ball that Bonds hit Aug. 7 to break Hank Aaron's record of 755 home runs. The final selling price was $752,467, well above most predictions that assumed Bonds' status as a lightning rod for the steroids debate in baseball would depress the value.

The asterisk suggests that Bonds' record is tainted by alleged steroid use. The slugger has denied knowingly using performance-enhancing drugs. Fans brought signs with asterisks on them to ballparks as he neared Aaron's hallowed mark.

Hall of Fame president Dale Petroskey, also interviewed on the show, said accepting the ball did not mean the Hall endorses the viewpoint that Barry Bonds used drugs.

"We're happy to get it," he said. "We're a nonprofit history museum, so this ball wouldn't be coming to Cooperstown without Marc Ecko buying it from the fan who caught it."

The Giants announced Friday they will part with Bonds after this season, the seven-time NL MVP's 15th in San Francisco and 22nd in the majors.