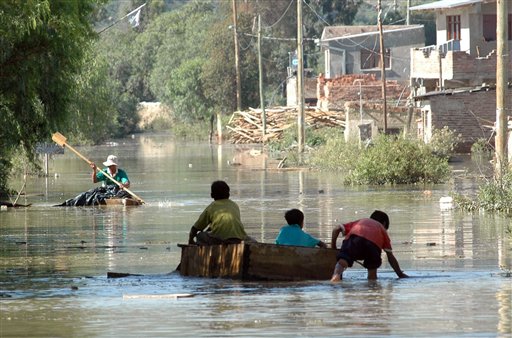 Bolivia's foreign minister said Thursday that the world has an obligation to send aid to flood-ravaged areas of Bolivia, linking a disaster that has killed 49 people to global climate change.

As Bolivia faces a second straight year of devastating floods, David Choquehuanca argued that developed nations who produce most of the world's greenhouse gases are morally obligated to pitch in when the negative effects of climate change strike poorer countries.

"The international community has the obligation to help to Bolivia because these are the consequences" of global warming, he told media.

A rainy season aggravated by La Nina _ a periodic cooling of waters in the Pacific Ocean _ has hit hard all across the country. In the capital La Paz, high in the Andes, hundreds of thousands of residents are living under severe water rationing after rain-fed landslides last month ruptured water mains throughout the city.

The mountain storms' runoff is now flooding the eastern lowlands. Trinidad, a city of 90,000, was surrounded by muddy water, and thousands of local residents camped out under tarps along the shoulders of the city's one raised highway.

Some scientists believe that global warming has raised ocean temperatures and increased evaporation, boosting the amount of moisture in the air and making La Nina storms more intense.

Bolivian President Evo Morales last year vowed to seek legal remedies if rich countries do not agree to pay for the environmental damage they have wreaked on the developing world.

To help Bolivia recover from this year's floods, the U.S. has so far pledged $150,000 and plans to deliver another shipment of supplies to Trinidad next week.