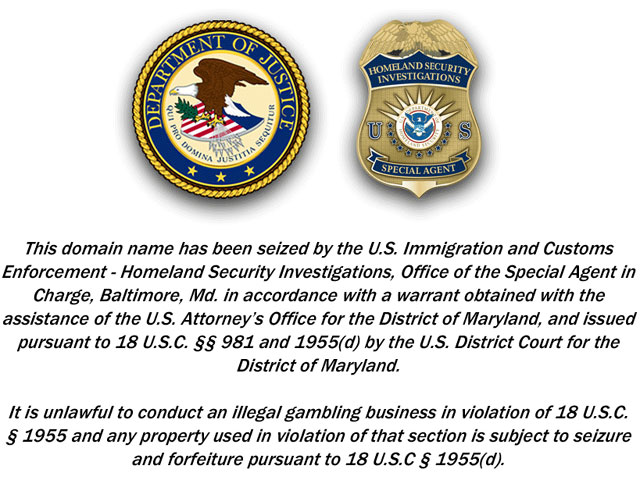 (CBS/AP) BALTIMORE - The gambling website Bodog.com was shut down, and its founder Calvin Ayre was indicted, for illegal gambling that generated more than $100 million in winnings, federal prosecutors said Tuesday.

The website's domain name was seized Monday and the indictments of four people, all Canadians, were unveiled Tuesday in Baltimore.

Gamblers in Maryland and elsewhere were sent at least $100 million by wire and check from 2005 to 2012, the U.S. Attorney's office said, adding that Bodog conducted a $42 million advertising campaign between 2005 and 2008 to attract gamblers to the website.

The operation allegedly moved funds from Bodog's accounts located in Switzerland, England, Malta, Canada and elsewhere to pay winnings to gamblers. The accused each face up to five years in prison for conducting an illegal gambling business and 20 years for money laundering. Bodog.com faces a fine of up to $500,000 for gambling and money laundering.

The indictments follow federal prosecutions last year of three of the biggest websites involved in online poker. More than 75 company bank accounts in 14 countries have been frozen, and authorities are seeking $3 billion in fines and restitution, in that investigation.

In addition to the 50-year-old Ayre, prosecutors say the indictment of Bodog names website operators James Philip, David Ferguson and Derrick Maloney. A U.S. Attorney's Office spokeswoman said arrest warrants had been issued for the four.

Ayre posted a statement on his website, CalvinAyre.com, saying that his company did not take U.S. bets.

"Bodog UK, Bodog Europe and Bodog Asia have never taken bets from the US," the statement said. "The Bodog Brand is currently consulting with its legal advisers with a view to having the domain returned."

Ayre also wrote, "I see this as abuse of the US criminal justice system for the commercial gain of large US corporations. It is clear that the online gaming industry is legal under international law and in the case of these documents is it also clear that the rule of law was not allowed to slow down a rush to try to win the war of public opinion."

An affidavit filed along with the warrant to seize the site said investigators created accounts with Maryland addresses and received checks in the mail for winnings. The affidavit also said investigators interviewed a former Bodog employee who named top officers and directors and said the company had hundreds of employees in Canada and Costa Rica handling day-to-day operations.

"Sports betting is illegal in Maryland, and federal law prohibits bookmakers from flouting that law simply because they are located outside the country," said U.S. Attorney Rod J. Rosenstein. "Many of the harms that underlie gambling prohibitions are exacerbated when the enterprises operate over the internet without regulation," Rosenstein added.