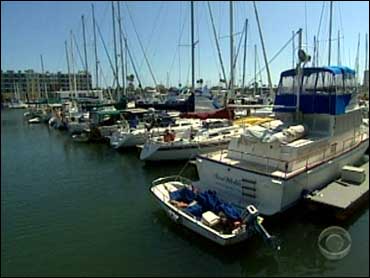 Lately, when Steve and Carolyn Cohen hit the water, they don't have much company - except for those who are already home, CBS News correspondent Ben Tracy reports.

Boaters are drowning in high fuel prices - nearly $6 per gallon at one dock near Los Angeles. To save on gas, boaters are taking shorter trips, slowing down, or turning to the marine version of the hybrid.

"If you are a boater and you're worried about the cost of gas, get out of boating," said boater Joe Vinetz.

And some are. They're turning docks into floating parking lots.

Because of gas prices?

Purcell's business has been cut in half by fuel costs and falling home prices, which make people less likely to splurge on big-ticket items.

Brunswick, the largest boat-maker in the world, announced it is suspending production at many of it its plants this month. Marinemax, the nation's No. 1 boat retailer, says its profits are down 50 percent.

It's one thing to have to cut back on pleasure cruising, but imagine if you were a commercial fisherman and your livelihood depended on keeping it fueled up.

Pete Ancich is a third-generation commercial fisherman. His profits are now snared by the 2,000 gallons it takes to fuel his voyages each month.

"Our profits are just shrinking by the second," he said. "If there are any left."

The price at the fuel dock has jumped 100 percent in the past year. Two hundred dollars worth of diesel now flows through the pump every minute.

He's scaled back his crew, and only heads out on the days the fish are likely to be biting.

"Could you see it getting to a point where the prices are so high that it makes more sense to leave the boat here?" Tracy asked.

As fuel prices continue to climb, a lot of people could be in the same boat.

On the web
Pain At The Pump