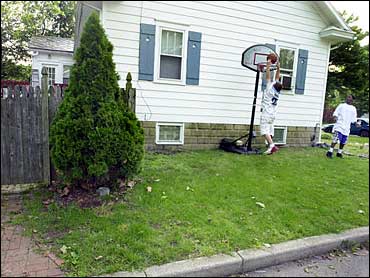 Twelve-year-old Danny King used to spend hours shooting baskets in the street in front of his home after his mom and dad bought him a portable hoop. But now the hoop is pushed up against the side of the house, mostly unused.

Portable basketball hoops have been banned from the streets of this working-class community of 6,160 along the Delaware River.

No one, it seems, is against a friendly game of one-on-one. The problem, municipal officials say, is that the hoops are a hazard to emergency vehicles, trash trucks and the players themselves.

"We all want to be Mayberry, but no government official can look a parent in the eye and say, `It's OK for your children to play in the street,"' said Paulsboro Police Chief Kenneth
Ridinger.

Around the country, in fact, towns are blowing the whistle on street basketball.

Citing safety concerns, communities in Kentucky, Nevada, New Jersey, New York, Ohio, Oregon and Pennsylvania have banned portable hoops in or around streets. Others are shooting to do the same.

The baskets emerged in the early '90s as a convenient and versatile alternative to permanent hoops, especially for families with small driveways or none at all. The baskets typically consist of an adjustable-height hoop, a backboard, a pole and a wheeled, weighted-down base that has to be filled with sand or water.

About 1 million are sold annually by Lifetime Products and Huffy.

For many parents, a portable hoop is preferable to letting children go to playgrounds or municipal basketball courts by themselves. Also, older kids tend to hog the playground courts.

In Paulsboro, Danny's parents put the hoop on a sidewalk along Huff Street. Danny's mother, Sharon King, liked the $150 hoop because she could keep an eye on her son while she did housework; Danny liked it because he could practice right at home, even though his driveway was not even big enough to park a car.

"We always played here, because the courts are usually flooded and it's no problem," said his buddy D.J. Fauntleroy. "When a car comes, we just call `Car!' and we move and then when it's passed, we continue to play."

In April, though, the Paulsboro Borough Council passed an ordinance banning basketball hoops or hockey nets on or next to streets, threatening $100 fines for a first offense and $250 fines for subsequent violations.

Residents had complained that basketball players were refusing to move from the street when cars drove through, or that the players harassed passing motorists. No injuries had been reported, but Mayor John Burzichelli said the borough was worried about liability.

"The call I fear the most is the call when you say, `Mayor, my child was hit,"' Burzichelli said.

Some parents agree, saying that allowing street basketball is tantamount to letting children play in traffic. As of Monday, no one had been cited for violating the ordinance.

"I think it's wonderful what they did," said Shelly Scott, 44, whose 7-year-old son, Philip, plays on a portable basket in the family's driveway. "The street is for cars, not basketball."

But many homes in this 2.1-square-mile city sit on small lots, with no driveways.

"It's a classic clash of interests," said Michael Reinemer, spokesman for the National League of Cities. "Certainly, you want a place for your kids to play, but you want to keep them safe. With the way a lot of cities are pressed fiscally, and with state budget crises rolling down to cities, it puts a squeeze on parks and recreation. You may see more of these hoops springing up."

That will not be good for basketball, said Chad Millman, co-author of "Pickup Artists: Street Basketball in America."

Pickup basketball is "where a lot of people still discover the game," he said. "It's the informal game, where people learn about competition and the mores of the game and the informal lingo of what it takes to play, beyond how to dribble, how to shoot, how to set a pick."

As for Danny, he is looking for somewhere to play.

After the ban passed, he took his ball to the outdoor courts at Loudenslager School and got sucker-punched by an older player in a pickup game.

"Which is safer - going to an elementary school where there's older kids and drugs, or outside my door where I can watch him?" his mother asked.