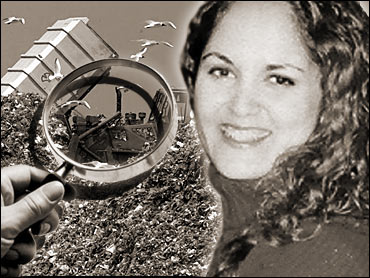 Sources say police did find blood inside Lori Hacking's apartment consistent with a stabbing, and it appeared as if someone had tried to wash that evidence away.

A mattress removed from the Salt Lake City apartment by police last week had either a red stain on it or on its cover.

The Deseret News reported that a knife with blood and hair was also one of the items seized, but the results of forensic tests on any evidence collected could be "weeks to months" away, a detective said.

Police have not called the apartment a crime scene, and they still won't say they're looking for a murderer, but revelations of blood evidence in the apartment, and a lack of evidence to suggest his wife ever left the apartment, hint at what Mark Hacking himself called the unthinkable in an interview 10 days ago.

"I don't know how she's hurt, in what ways or how bad, but she's obviously, something's wrong," he said on July 19.

"We do have individuals, other individuals, who are potential persons of interest," said Det. Phil Eslinger. "At this point in time, we have not discounted any theory as to Lori's disappearance."

For the third night in a row, searchers combed the Salt Lake County landfill looking for clues, using a backhoe and cadaver dogs to dig through the trash.

Nothing important was found overnight, but the Deseret News reports police targeted the landfill one day after Lori Hacking was reported missing, indicating they knew they had a criminal investigation even then.

"She didn't look too happy she looked like something was bothering her," he said.

He said Mark Hacking visited the store several times a week, and had asked clerks not to tell his wife he was buying cigarettes.

Mark Hacking, 28, has come under scrutiny for buying a new mattress shortly before reporting his wife missing, as well as lying to his wife, family and police about being accepted to a North Carolina medical school.

"We learned a lot of things in his life that are not true," Detective Dwayne Baird said Tuesday. "Medical school was the pinnacle of that deception."

"He worked harder at maintaining his lies and deceptions than others do at earning a living," he added Wednesday.

The nightshift hospital orderly was checked into a psychiatric ward by his family after being found outside, naked, a night after the search for his wife began.

Assistant District Attorney Bob Stott said Mark Hacking is free to leave the hospital. Hacking has not been charged with a crime.

Police say they're not sure what they'd do if he wanted to leave town.

"That would be something we would have to look into, but again that's speculation I'm not willing to go into," Baird said.

Hacking is apparently so unreliable, it seems police have given up talking to him, reports Cowan. The last time they interviewed Hacking was over a week ago — the same time they started searching the local landfill.

Police appear to believe Lori Hacking is in Utah somewhere. They have not so far requested the help of the FBI, who would be called if they felt the search needed to go cross state lines.