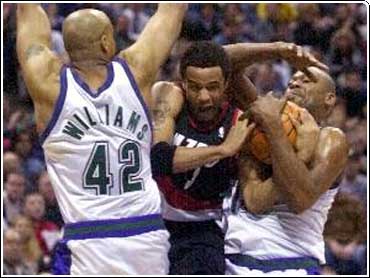 It wasn't Portland's 37 points in the fourth quarter. It wasn't the ferocious defensive stand in the closing minutes. It wasn't even the acrobatic array of dunks, 3-pointers and blocked shots.

The most impressive facet of the Trail Blazers' 115-111 victory over Milwaukee on Monday night was how remarkably easy it looked.

Steve Smith had 24 points and hit a key jumper with 34 seconds left as Portland roared from behind to squash the Bucks and record its ninth victory in 10 games even though the Blazers were playing their fourth road game in five nights.

Portland, which has the league's best overall record at 37-11, is playing with an ease that comes from depth, experience and, above all, confidence.

"We have an ability to stay in games and pull them out in the end," guard Greg Anthony said. "We didn't play great all night, but when it's time to go, we go."

Portland improved its road record to a 20-8 while playing just one night after a 100-94 victory in Boston. The travel and the heavy work didn't seem even to faze the Blazers, who handed Milwaukee its third loss in four games.

"First of all, we've got good bench support, and that gets us through some tough stretches," coach Mike Dunleavy said. "Our stats look different every night. Different guys do it for us every night."

The Blazers trailed much of the game before storming back against the inconsistent Bucks, who shot 56 percent from the field but couldn't execute in the fourth quarter. Portland hit 11 of 15 shots in the final period.

"It was a prime example of us not taking advantage of possessions," Milwaukee's Ray Allen said. "Portland did that. They went to the free-throw line or took advantage of every other possession. That's how they won the game."

The Bucks scored at will for much of the night, but after Glenn Robinson's jumper tied it at 97 with 5:21 to play, the Blazers made an 11-4 run keyed by big defensive plays from Anthony, Smith and Rasheed Wallace. Milwaukee managed just two jumpers by Danny Manning in a four-minute span.

While all this was going on, the man many call the game's best defensive player was a spectator. Scottie Pippen played just one minute in the fourth quarter and finished with 11 points.

"It's tough sometimes, but Mike leaves it up to the players to determine who's going to play," Pippen said. "The guys who were in there were getting the job done."

Portland took its first lead since the second quarter at 89-88 on a jumper by Detlef Schrempf with 8:55 to play. Five reserves got the Blazers back into the game with a 15-7 run spanning the third and fourth quarters.

"That was the bench guys stepping up," Anthony said. "Once we got them stopped, we got some shots to fall."

Milwaukee's 111 points were 23 more than Portland's league-low defensive average of 88.6 points. Robinson led the Bucks with 27 points, Allen had 26 and Sam Cassell added 18 points and 13 assists.

Wallace had 17 points and Anthony added 14.

Milwaukee lost for the fourth time in six home games. Consecutive home losses have killed the good vibes the Bucks had from a 3-2 Western road swing last week, and Milwaukee fell further back in the Eastern Conference playoff picture.

"They are a prolific team, and I think they got the benefit of the calls," said Milwaukee coach George Karl, who spent much of the fourth quarter arguing over the 11 fouls called on the Bucks.

Dunleavy, who was the Bucks' coach and general manager from 1992-96, beat his former team for the first time.

"I root for these guys when we're not playing them," Dunleavy said of the Bucks. "I drafted three All-Stars (Allen, Robinson and since-traded Vin Baker) while I was here."