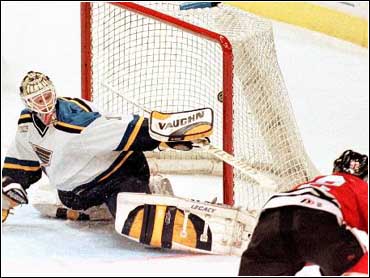 With a four-goal second period, the Blackhawks snapped the Blues' six-game winning streak Sunday with a 4-1 victory.

"We were feeling pretty good about ourselves, but this should get our attention," Blues coach Joel Quenneville said. "This is a good correction."

Steve Sullivan and Michael Nylander each had a goal and assist to lead Chicago. Alexei Zhamnov and Eric Daze also scored for the Blackhawks, and Jocelyn Thibault made 24 saves.

Michael Handzus scored his 19th goal for St. Louis. Although the Blues outshot the Hawks 25-20, Chicago had the better scoring chances.

"We played well defensively, and we were able to create some odd-man rushes against a team that doesn't give up very many odd-man rushes usually," Sullivan said. "They were trying to force a little too much and we caught them flatfooted."

Sullivan was somewhat surprised by how easy things came.

"I don't know if they were ready to play against us," he said. "They're a very, very good hockey club in my mind. Probably the best in the league. I don't think they played the way they usually can."

"Not one of our better efforts," Quenneville said. "It's one game we'll try to forget quickly."

The Blackhawks, though, would like to repeat it as much as possible.

"It all started in our end, obviously," associate head coach Lorne Molleken said. "We had a lot of guys coming back in our end who did goo jobs picking up the right people."

In 43 of their 62 games, the Blues have allowed two goals or less and St. Louis entered the game No. 1 in team defense (2.01 goals per game). But the Blackhawks took command in the middle period.

Daze got things going with an unassisted goal at 4:30. St. Louis broke in 3-on-2, but Daze stole the puck from Stephane Richer just inside his own blue line. He skated untouched down right wing and beat Roman Turek with a slap shot from the top of the right circle for his 23rd goal.

Just 1:22 later, Zhamnov scored his 16th goal to make it 2-0. Zhamnov tipped Bryan McCabe's shot from the left point out of the air and past Turek. The play was reviewed, but allowed to stand.

A defensive breakdown allowed the Blackhawks to take a 3-0 lead. Nylander knocked down Scott Young's clearing effort just outside the St. Louis blue line, then sent in Sullivan alone on Turek. Sullivan walked in and scored his 12th goal at 12:18.

Nylander put the game away with his 17th goal off a 3-on-1 break at 18:17. Turek played the rest of the period, but was pulled at the start of the third in favor of Jamie McLennan.

Play was suspended with 6:52 remaining in the first period due to a brief power outage. After a normal intermission, the teams returned to finish the period. The goalies switched ends and the second period began immediately after.