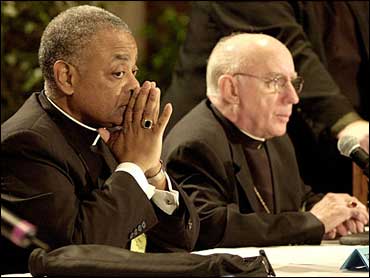 "My brother bishops and I remain committed to all we promised" in a reform plan approved a year ago, Bishop Wilton Gregory of Belleville, Ill., president of the U.S. Conference of Catholic Bishops, said in a news conference following the conclusion of the bishops' semiannual meeting.

Archbishop Harry Flynn of St. Paul and Minneapolis, chairman of a committee handling the abuse crisis, told the meeting the hierarchy has made "a monumental effort" to apply the reforms, remove clergy molesters from active ministry and restore confidence among priests and laity.

"Our commitment has not wavered," Flynn insisted.

CBS News Correspondent Tracy Smith says the bishops had hoped to put the sex abuse scandal behind them this year. But as they headed home, it was clear that the scandal that rocked the church a year ago is still "the dominant force threatening to tear the church apart."

The assurances at the news conference capped a week that began when the chairman of the National Review Board, an independent lay board that monitors the bishops' performance in following the reforms, accused some of not cooperating and quit. Lobbies of lay Catholics and abuse victims who also gathered in St. Louis during the bishops' meeting added to the criticism.

Two pivotal projects are under way: a questionnaire bishops are supposed to file with the National Review Board detailing all abuse cases for a national report on the extent of the crisis, and an audit of the nation's 195 dioceses to see if they are complying with the reforms.

Los Angeles Cardinal Roger Mahony had led California's bishops in refusing to file a report answering the questionnaire, saying it would violate the state's privacy laws. However, the Californians announced Thursday they would encrypt the report, removing any legal problem.

Following Flynn's report Saturday, the bishops approved a motion by Mahony asking Flynn's committee to commission a second survey in a year or two once pending civil and criminal cases are completed.

"There are a lot of unresolved cases out there," Mahony told an impromptu news conference.

The audit of the dioceses is to begin later this month.

Still, there was little confidence in the bishops among the 200 members of Survivors Network of those Abused by Priests (SNAP) attending their first national assembly across town.

"Who shall we count on? Three hundred men in black?" asked Mark Serrano, a SNAP leader from Virginia. "Or shall we rely on ourselves and demand change from the civil authorities, and rely on the people in the pews with children who must take the church back?"

Leaders of SNAP, which has been at the heart of the debate about clergy molesters the past 18 months, said a year after U.S. bishops approved reform policies to end the sex abuse crisis, victims still find it hard to get meetings with the national bishops' conference and local church leaders.

The group praised one prelate, Bishop Paul Bootkoski of Metuchen, N.J., calling him "the model bishop in America."

Bootkoski has initiated contact with victims, personally met with them and apologized, SNAP said. He also appointed three victims to the local review board that advises him on allegations against clergy, and cooperated fully with sex crime prosecutors.

The bishops spent all day Friday behind closed doors discussing the idea of calling a special, nationwide church council, the first since 1884, to discuss church problems.

No decision about a "plenary council" will be made until a year from now, and Vatican approval would be needed. The actual council would take place years after that.

Flynn's report, also looking ahead, said his committee is now working on coordinating abuse policy with leaders of the separate men's religious orders, what to do with abusers who remain in the priesthood but are barred from active ministry, and ongoing concerns of clergy about the bishops' crackdown.

At the SNAP meeting, President Barbara Blaine said the group now has 4,600 members. Since the abuse scandals broke in January 2002, SNAP has expanded from a handful of local victims' support groups to 50. It operates on a shoestring budget, but now has a paid staff of three.

Saturday night, SNAP members planned to name a series of goals to guide future work, including work with victims, legislative lobbying and relations with the church.

National Director David Clohessy, who lives in St. Louis, said SNAP is "95 percent Alcoholics Anonymous and 5 percent Mothers Against Drunk Drivers," meaning that while SNAP has been visible in criticizing bishops, most of its time and energy goes to helping victims find healing.

The other national victims' group is The Linkup, based in Louisville, Ky. President Susan Archibald said the group has 3,000 members, including Protestants, and has held annual meetings since its founding in 1991.