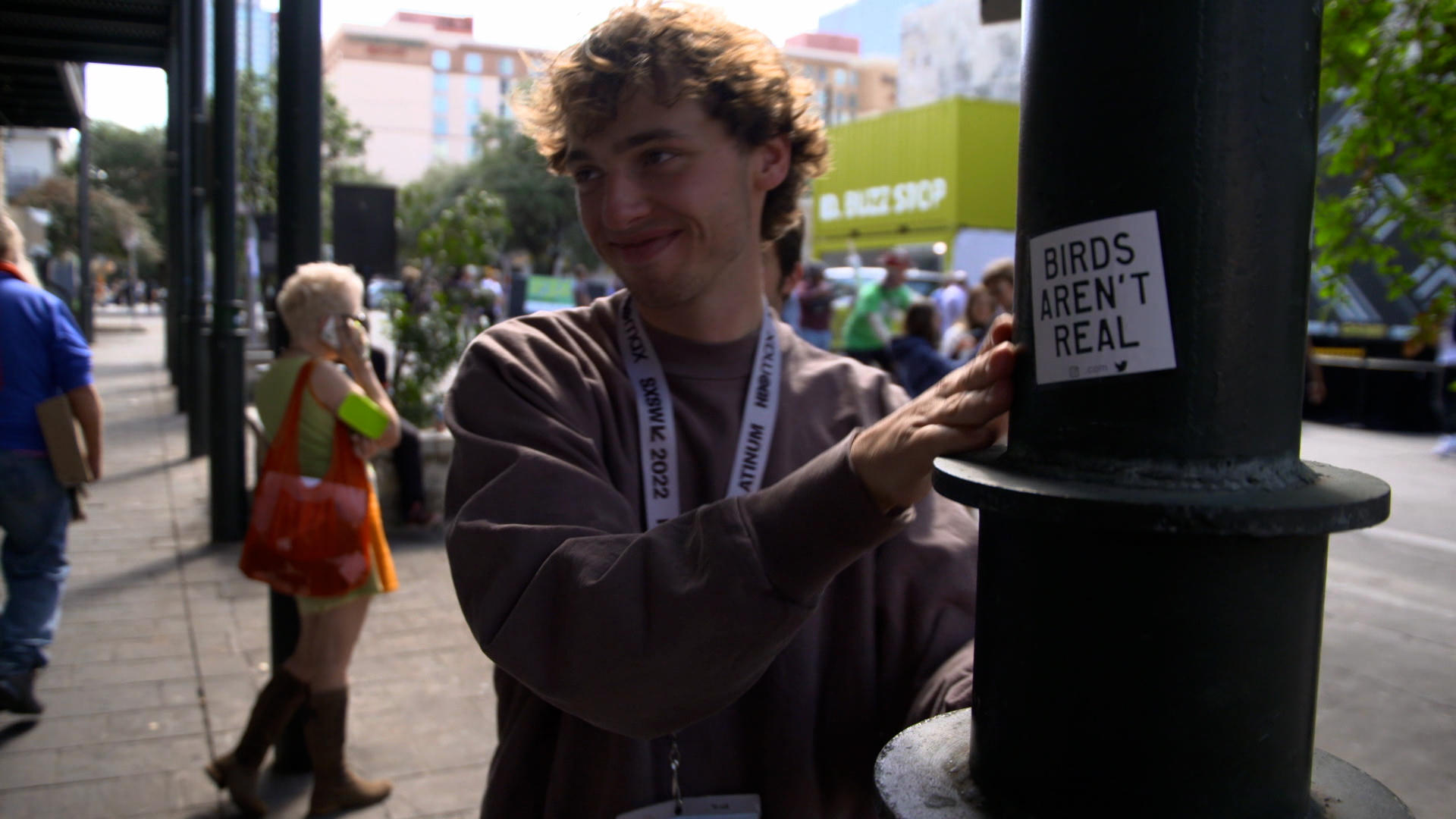 It's spread to billboards, bumper stickers and popped up at halftime during the NCAA men's basketball national championship game. More than a million people have become followers of Birds Aren't Real, a movement that claims the birds you think you see flying in the sky are actually government surveillance drones.

Thankfully, it's all pure satire.

The "conspiracy theory" is intended to mirror some of the absurdity that's taken flight across the country.

Peter McIndoe, the 24-year-old college dropout behind Birds Aren't Real, is, fortunately, nothing like the megaphone-carrying, cowboy hat-wearing character he portrays.

He told 60 Minutes this week about the parody.

"So it's taking this concept of misinformation and almost building a little safe space to come together within it and laugh at it, rather than be scared by it," McIndoe said. "And accept the lunacy of it all and be a bird truther for a moment in time when everything's so crazy."

"The vision was creating something that reflected the absurdity through the eyes of the most confused archetype," McIndoe said.

McIndoe's been rebelling since his days growing up in a small town in Arkansas. He said it was a hyper-conservative, fundamentalist community where conspiracy theories were "embedded in the community."

McIndoe stayed out of jail and enrolled at the University of Arkansas with no intent to hatch Birds Aren't Real. The idea was an accident. A day after President Trump's inauguration in 2017, McIndoe was hanging out with friends in Memphis on the roof of a building when they heard demonstrators in the streets below.

"I remember thinking it would be very interesting if someone was in this situation with a sign that had nothing to do with anything that's going on here," McIndoe told Alfosni.

"And so how did you get to Birds Aren't Real as the thing that's on the sign?" Alfonsi asked.

"I don't even know," McIndoe said. "It was just the most absurd thing I could think of."

Sign in hand, he took to the streets of Memphis, adlibbing a stream of absurdities.

"I'm angry, and I'm here to protest," McIndoe yelled at the time. "Wake up America! Birds are not real, they're a myth, they're an illusion. Thank you for your time."

Peter's friend, Ally Perkins, innocently posted a video of that day online and then everything changed.

"Did you think at that point, like, 'This is awesome' or 'What have I done?'" Alfonsi asked.

"I remember being fascinated by it," McIndoe said. "I remember thinking, 'Okay, why do people identify with this so much?' And just thinking, like, there was this energy in Memphis for this idea, and that I would always regret it if I didn't lean into that."

"What did your parents think," Alfonsi asked, "when you said, 'I'm dropping out of college, I'm moving to Memphis to start a fake conspiracy theory?'"

"Yeah, I mean, it was really interesting, I was trying to describe to them it could be a very interesting art project, sort of like a mirror to, you now, just the seemingly exponentially growing absurdity of the world and America," McIndoe said. "And, like, if we can match that with a character in a living world, blah, blah, blah. And they're just lookin' at me, like, 'Please stick with the psychology degree' you know."

McIndoe enlisted his friend Connor Gaydos, a history buff, to write a backstory for the birds movement.

"The CIA was so sick and tired of the birds pooping on their windshields. So they're like, we're sick of this, we're fed up with this. Let's hire, you know, engineers to, to get rid of these stupid birds." Gaydos said. "And while we're at it, let's replace em with robots and spy on people. So, it's, it's, it's a joke."

But then, they took the story a step further. Every conspiracy needs a "deep state" whistleblower.

McIndoe invented, and interviewed, a character called Eugene Price.  Price is supposed to be a former CIA officer who buried evidence of the bird genocide and the rise of the drones.

"When you were hiring an actor to play Eugene Price," Alfonsi asked McIndoe, "what were you looking for in that actor?"

"The oldest man I could find," McIndoe said. "I was looking for someone who looked like they had just had some guilt weighing down on them for years. Like, I really wanted bags under the eyes, sleepless nights. We released a video titled The Confession Of Eugene Price, where he, for the first time ever on record, an ex-CIA agent came out and said everything the government had done."

That video got over ten million views on TikTok.

"Are there people who believe that birds aren't real?" Alfonsi asked.