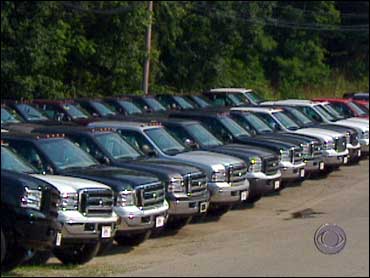 GM had warned that its June sales would be down significantly because of aggressive discounts last summer.

Paul Ballew, GM's executive director of global market and industry analysis, said comparisons to last year were difficult because of the promotion, which allowed all customers to purchase vehicles at the price given to employees.

"The Employee Discount for Everyone program and the success of that program was probably a once-in-a-decade home run for the industry and certainly for ourselves," Ballew said in a conference call.

He said the June performance was in line with the company's expectations.

High gas prices cut into sales of pickups and big sport utility vehicles — traditionally the stronger segment at both GM and Ford. GM's truck sales fell 37 percent in June, while cars were down less than one-half of one percent.

Year-to-date, GM's sales are down 12.2 percent, including a 13 percent drop for trucks and an 11 percent dip for cars.

Sales of truck-based sport utility vehicles have been declining across the industry for four years in a row, but until recently, pickups were relatively immune from the phenomenon, Ford said. However, pickup buyers now appear to be delaying purchases because of the pressure of high fuel costs, said Al Giombetti, president of marketing and sales for Ford, Lincoln and Mercury.

In a statement, Giombetti said the increase in car sales is "cause for optimism because it shows we can win in the industry's most competitive segment."

In the first half of the year, Ford's sales fell 3.8 percent, with truck sales sliding 9.7 percent and car sales rising 7.8 percent.

Toyota, however, continued to gain ground in trucks, selling 4.8 percent more last month than in June 2005. But its biggest gains were in car sales, which climbed 21.9 percent.

Jim Lentz, executive vice president of Toyota's U.S. division, pointed to a 38.7 percent increase in sales of the Toyota Corolla, one of the most fuel-efficient models, as evidence of the impact of gas prices.

Chrysler said it expects an employee pricing program it launched over the weekend, along with its "Ask Dr. Z" ad campaign, featuring DaimlerChrysler Chairman Dieter Zetsche, to boost sales.

The Associated Press reports unadjusted sales figures, calculating the percentage change in the total number of vehicles sold in one month compared with the same month a year earlier. Some automakers report percentages that are adjusted for the number of sales days in a month.