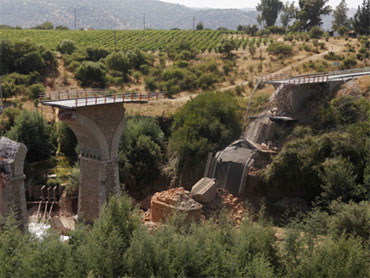 With major seismic events in Haiti and Chile occurring so close together, and relatively close to the United States, is another major earthquake due to strike our country?

On CBS' "The Early Show" this morning, Dr. Marcia McNutt, a geophysicist and director of the U.S. Geological Survey, said it is not a matter of if, but when Americans will face a similar event.

The U.S. Geological Survey tracks seismic activity around the globe, including the dozens of powerful aftershocks that have been occurring since Saturday's 8.8-magnitude quake. The death toll is currently more than 700.

The USGS' Earthquake Hazards Program analyzes data obtained from earthquakes and their aftermath to study quake characteristics, to help mitigate the losses in death, injury and property damage from such events.

When asked if there is more seismic activity recently, McNutt said, "Well, yes. I think we do sense that there is a lot happening right now. I mean, I think the people at the USGS just wish we'd sort of have a break right now, with a major earthquake in January and now one in February.

"We do know that earthquakes are not completely randomly distributed in space as well as time. And this does seem to be a sort of active period. But if you look at it through the lens of geologic time, it does average out."

The Earth's plates are in constant motion, said Dr. McNutt, so seismic shifts of this magnitude are expected to happen on an irregular basis. The quake occurred at the interface of the Nazca and South American tectonic plates (which are converging at a rate of 80 mm a year), when the sea floor slides underneath the South American continent.

Coastal Chile has experienced 13 quakes of magnitude 7.0 or greater since 1973. The largest earthquake ever recorded by instrument, in May 1960, happened here when a 9.5-magnitude event killed 1,655 people and generated tsunami waves that killed dozens more across the Pacific. Central Chile also experienced an 8.5-mag. earthquake in November 1922, which killed several hundred and created a 30-foot tsunami.

At some point, Dr. McNutt said, the United States will have a quake, perhaps not as large as Chile's, but just as devastating because of population density.

Every time one of these disasters hits, we have to use it to better prepare ourselves, said Dr. McNutt. This quake in Chile is so very much like a disaster that could hit us, because Chile is a well-prepared country, just like the U.S., with good building codes.

Scientists have said that the energy released by Saturday's quake is 500 times that released by the 7.0-magnitude earthquake that struck Haiti. But Chileans benefited from the fact that the coastal epicenter of the quake was located just off-shore, and much further down under the sea bed.

Also beneficial was Chile's infrastructure. Although half a million homes were damaged, buildings survived in much better condition than did Haiti's, thanks to stringent building codes.

"While the earthquake in Chile was a little deeper, we are talking about an absolutely massive earthquake compared to the one in Port-au-Prince," said Dr. McNutt. "And had the buildings in Chile been built to the standards of the ones in Haiti, that massive earthquake would have caused untold destruction. 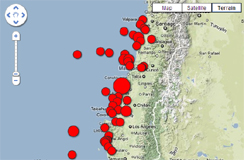 "The good news there is, with the building codes they had in Chile, they are going come out so much better than would have been the case. That is basically what we're seeing coming out of Chile, is that the vast majority of the buildings did stand."

Chile's transportation infrastructure took a big hit, as seen in the collapsed bridges and highways.

It should be a wake-up call to the U.S., noted Dr. McNutt, given the fragile state of America's infrastructure even before a quake.

The U.S. Department of Transportation's 2008 report on the state of our highways found that nearly 14% of the nation's bridges are "functionally obsolete," with another 12% "structurally deficient."