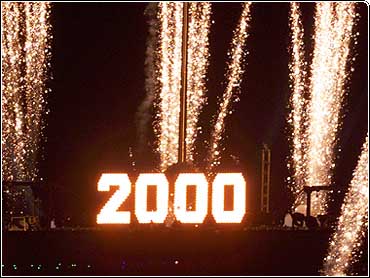 New York promised the millennial party to end all millennial parties. And it looks like that promise was kept. CBS Correspondent Russ Mitchell reported from the scene of the celebration in Times Square, which started before 6 a.m. Friday and is continued into the wee hours of the year 2000.

A crowd estimated at more than a million exploded with joy as a giant, glittering crystal ball dropped down a 77-foot pole to mark the arrival of midnight.

The marathon celebration had begun many hours before, when the ball was raised above One Times Square. Several thousand people had already gathered below to indulge in the first of many countdowns as 7 a.m. approached.

The sun had not yet risen in New York City as a haunting pageant of 12-foot-tall fans and serpentine flags in tropical colors waved, evoking the South Pacific islands where 2000 had already begun. Surging music enveloped the square.

Meanwhile, 8,000 cops were on duty, and they weren't taking chances; NYPD helicopters buzzed the square all day.

A student at Columbia University, Alison Gorr, 27, said the scene was impressive. "We're glad we woke up in the middle of the night to be here," she said.

Simon Phillips, 30, of Brisbane, Australia, said he had planned to be at New York's 2000 celebration five years ago as part of an around-the-world tour.

"We wanted the millennium to be in Times Square for obvious reasons - the biggest party ever," Phillips said, crouching under one of the shelters with his wife Tracy, 23. "We just didn't expect it to be wet and rainy."

After three years of planning, amid fears of terrorism and anticipation of the 21st century, the Times Square 2000 bash kicked off a once-in-a-lifetime al fresco bash for revelers from around the world.

It only seems like the $7 million event took 1,000 years to arrange, from forging cast-iron millennial manhole covers, to organizing 24 hours of entertainment, to transporting a stunning new Waterford crystal ball from Ireland to the Big Apple.

But when the ball -- actually, a translucent, geodesic sphere, six feet in diameter, weighing approximately 1070 pounds and covered with 504 Waterford crystal triangles featuring an original "Star of Hope" design -- dropped, it rang down a New York century that began under Mayor Robert Van Wyck and ended, 16 mayors later, with Rudolph Giuliani.

Already tight security for the Manhattan blowout was heightened Thursday when members of the Joint Terrorism Task Force arrested a Brooklyn man, saying he had possible ties to an Algerian who allegedly tried to smuggle explosives into the United States from Canada.

City officials have repeatedly said that every precaution was taken to make the Times Square event safe and secure, even as others mentioned it as a possible terrorist target.

In the end, the incidents appeared to be few. Two Manhattan millennium revelers were charged with assaulting three police officers. Police say the yountourists refused to leave an overcrowded area. Police arrested a Michigan man with a loaded rifle near the Times Square celebration. The man was charged with criminal possession of a weapon.

In Times Square, CBS News Correspondent Thalia Assuras asked Mayor Giuliani how he planned to guarantee safety for the crowd. "You never guarantee safety, but you do the best you can to create a reasonable degree of safety..." the mayor said. "We'll make sure the people act in a peaceful way, and make sure they don't have liquor with them...I've been part of it since 1994 and it's always been a really wonderful celebration. This year I think it will be absolutely spectacular."

A total of 1,000 workers and volunteers teamed with 500 musicians, dancers and actors, plus 160 oversized puppets, to entertain the assembled crowd. There was live music, dancers toting 95 painted umbrellas, fireworks, 11-foot sun fans and a 26-foot whale puppet -- and that was all before 10 a.m.

A half-dozen video screens beamed the event to the crowds in and around Times Square, while a live Internet feed was available to those not venturing outside the house.

The first Times Square New Year's party was in 1904, when the owners of One Times Square sponsored a rooftop affair. There were some fireworks, but they were soon deemed insufficient.