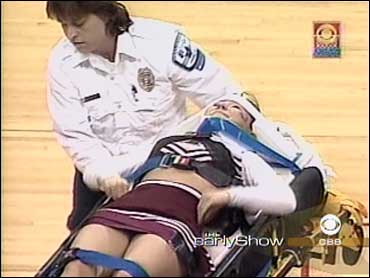 George Steinbrenner hoisted a broom from a parade float. Darryl Strawberry broke down in tears. And millions of fans staged another Broadway revival with a blizzard of confetti.

"This stuff never gets old," New York Yankees manager Joe Torre said at a City Hall rally after the parade Friday. "This one seemed even better. I think you appreciate it more each time you do it."

This was the Yankees' third title and third parade in the last four years. A half-dozen floats carried the players, eliciting wild screams and chants of "Let's go Yankees!"

Police Commissioner Howard Safir generously estimated the crowd at 3.6 million, topping the crowds for the 1996 and 1998 parades.

On a day that felt more like spring, designated hitter Chili Davis puffed on a victory cigar. Strawberry videotaped the roaring, face-painted crowd and then cried at a City Hall rally presided over by the city's most prominent Yankees fan, Mayor Rudolph Giuliani.

Strawberry, who withstood colon cancer and legal problems this season, was overcome with emotion as he acknowledged his manager. Torre embraced him until the outfielder composed himself and said, "Thank you for caring for me, and I love you guys."

World Series MVP Mariano Rivera, the unhittable reliever, had a float all to himself. Yogi Berra, the Hall of Fame catcher, paraded in a vintage car. And Steinbrenner, the Yankees' owner, rode in the top of a double-decker bus, brandishing a broom in tribute to his team's sweep of the Atlanta Braves.

"It's a great feeling to win in front of you fans," said shortstop Derek Jeter, with yet another World Series ring. "With the exception of Yogi, everyone has a few more fingers to fill."

David Cone paid homage to the Yankee family Torre, whom he called the team's "father," coach Don Zimmer, the "crazy uncle," and Steinbrenner, whom he referred to as "the very wealthy, eccentric grandfather."

Forty-five minutes before the parade's noon start, fans were lined six and seven deep on the sidewalks along the financial district's narrow streets. There was no official estimate on the size of the crowd.

The route, from the Battery to City Hall, is less than a mile. Many revelers never even caught a glimpse of the festivities. The crowd around City Hall, where each player received a key to the city, stretched several blocks to the Brooklyn Bridge at the parade's height.

"Jetr for mayor," read one sign along the route, and the 25-year-old shortstop was clearly the most valuable player to many of the young women.

"I would like to marry him one day," said Melissa Grimsley, 16. She and friend JoAnna DelVecchio wore Jeter jerseys and ditched school for the parade.

They weren't the only students taking the day off. High school attendance was down about 17 percent from an average day, the Board of Education said.

There were six arrests during the parade. One man was accused of igniting small fire in the ankle-deep paper along the street. A woman was charged with indecent exposure for appearing topless on a balcony above the crowd.

Cone, a potential free agent, was serenaded was a chant of "One more year!"

The mayor's administration was less gracious toward Democratic state assembly members who voted to repeal New York's commuter tax - a move that cost the city an estimated $210 million a year.

Deputy Mayor Joseph Lhota said the invitations were rescinded to send a message: Don't vote against the city's interests. Assemblyman Paul Tonko, a Yankees fan from upstate, said he took away this message: "He puts the rude in Rudy."

But this was not a day for politics.

"We're making this a yearly tradition!" shouted Charlie Hine, a UPS employee from Connecticut who skipped work for the second straight year to cheer his team. "We'll be back next year!"