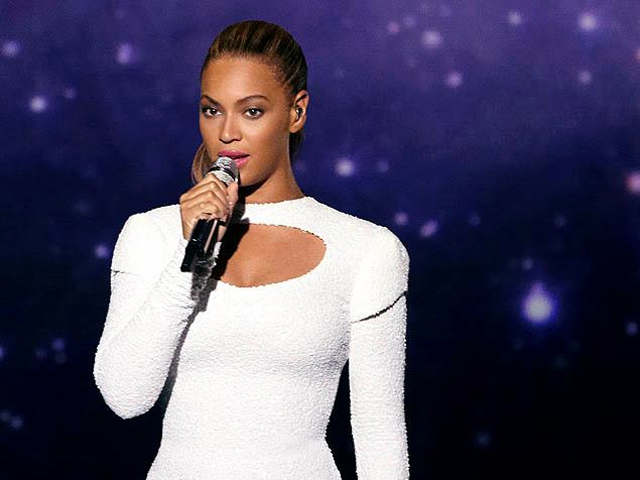 (CBS News) UNITED NATIONS - Beyonce was breathtaking. No other way to describe the stunning performance at the General Assembly Hall of United Nations Headquarters in New York on Friday night, when she sang "I Was Here" in honor of humanitarian aid workers killed in the line of duty around the world to be broadcast on August 19th.

"She was fantastic," U.K. Ambassador to the U.N., Sir Mark Lyall Grant, said after the performance, which he attended with his daughter.

"World Humanitarian Day is a chance to pay tribute to the commitment and courage of those who work in some of the world's most dangerous places," the ambassador told CBS News, "It's fantastic that a world-acclaimed artist like Beyonce is helping to raise awareness for this important cause -- she's reminding us that we can all play a part in relieving suffering around the world."

It was on the same platform where Col. Muammar Qaddafi once rambled on for hours; Nikita Khrushchev pounded his shoe; Fidel Castro spoke for over three hours; and every U.S. president, since the U.N. was founded, has addressed diplomats. With the podium moved aside for a screen designed by filmmaker Ridley Scott, the world-renowned diva delivered a message of legacy with her ballad, "I Was Here," written by Diane Warren about the personal drive to be remembered and to leave a "footprint."

Beyonce to sing at U.N. for humanitarian aid cause

Leading up to the featured event, Laurent Vieira de Mello spoke about his father, Sérgio Vieira de Mello, the late High Commissioner of Human Rights and Head of the Office of Coordination of Humanitarian Affairs (OCHA, the organization sponsoring the event), who was killed in Baghdad with 21 of his colleagues in the bloodiest attack that ever targeted the United Nations on August 19th, 2003.

The legacies of many of the humanitarian workers who died that day are not mentioned often. Arthur Helton, a lawyer and refugee advocate who was a colleague and friend of mine and with whom I traveled on a humanitarian project for the Open Society Institute, died along with Viera de Mello.

Newly appointed Deputy Secretary General Jan Eliasson opened the program, calling the attack, a "dark day in the history of the U.N."

And, Beyonce closed the event saying, "I'd like to ask everyone to make sure they're a part of August 19th. It's such a beautiful, beautiful day, and I'd like to honor the 22 people who lost their lives. God bless you all. Thank you so much for having me."

The tattered flag was brought to the U.N. a few years ago and is in the Visitor's Lobby and, in 2008, when Pope Benedict XVI came to speak at the General Assembly, he stopped to bless the U.N. flag from the Iraq attack.

Vieira de Mello's son, Laurent, told CBS News, "I think it is great way to spread the word of humanitarian action beyond the U.N. and get the general public involved, because Beyonce is the missing link between the U.N. and the public.

Actress Julia Stiles, on her way into the performance, said, "Beyonce is kick ass and, it is the U.N., which is very exciting."

R & B singer The Dream added, "I really believe in being a better human being on a daily basis, especially from the culture we are from, it is a big step."

The evening also heard from a former child soldier and author, Ishmael Beah, and even a local photographer who had worked to help homeless people.

The performance took place in the largest room in the United Nations, the 1,800-person-capacity General Assembly, which will be host to the General Debate of world leaders this September.