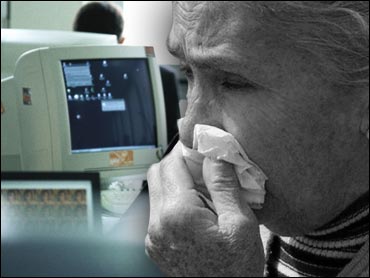 There are dozens of toxic chemicals inside your home in the air and dust, say scientists, and there's little you can do about it.

Some of the chemical levels exceed government guidelines for health risk, while for nearly half the compounds, there is no recommended maximum.

A study of 120 homes in Cape Code, Mass., reported in the Los Angeles Times, found 67 contaminants, mostly chemicals found in plastics, detergents and cosmetics, as well as insecticides and flame retardants used in foam furnishings.

It's part of a decade-long study of 2,100 women to determine why Cape Code has a high prevalence of breast cancer, but there's also concern that children breathe in the dust, affecting their hormone development.

Every house tested contained nine chemicals, six of them phthalates, found mostly in cosmetics and plastics, and three alkylphenols, one of which is used in detergents and cleaning solutions.

The study concludes that, because the compounds are so common in household products and rarely listed as ingredients, it would be difficult to limit exposure.

However, the research by the Silent Spring Institute of Newton, Mass. and Harvard University's School of Public Health, may help the government prioritize which compounds pose a high risk.

Little is known about the chemicals that have been shown to alter hormones in laboratory tests, including what effects they have on humans or at what levels they pose a risk, The Times reports.

In the lab tests, some of the chemicals mimic estrogen, block testosterone, and alter thyroid hormones, which control how the brain of a fetus develops.

"This is a wake-up call," said Linda Birnbaum, chief of experimental toxicology at the Environmental Protection Agency. "These chemicals are all over, and are these things that we really want all over? That's the question we have to address."

The results of the Massachusetts study were published in the online version of the journal Environmental Science & Technology.

Unlike other studies, the sampling was done in residential neighborhoods, not in areas with smokestack industries or farms where pollutants might be coming from outdoors.

"People spend most of their time indoors, and chemical concentrations build up indoors — so much so that they typically exceed outdoor concentrations," said Ruthann Rudel, the study's lead investigator and a senior toxicologist at the Silent Spring Institute. "A lot of (the chemicals found) seem to be inescapable."

The researchers said there was no reason to believe that contaminants in Cape Cod homes would be more prevalent than elsewhere in the country.

"It's very clear that these must be very common exposures," said Julia Brody, executive director of the Silent Spring Institute, which specializes in women's environmental health issues.

The research shows that many chemicals break down slowly inside houses. For example, DDT, which was banned 30 years ago, was found in dust in 65 percent of the homes, and the DDT levels were higher than the levels of many of the pesticides still in use today.

The most prevalent pesticide found was permethrin, an active ingredient in many household insecticide sprays.

The study did not determine whether people within the households were actually ingesting or inhaling the chemicals from the dust and indoor air, but a previous study by the national Centers for Disease Control and Prevention found many of the same chemicals inside the bodies of Americans.

"We're living in a soup," said Susan Teitelbaum, assistant professor of community and preventive medicine at Mount Sinai School of Medicine in New York City. "We're being exposed to all of these chemicals through food, through contact with products, as well as things that settle in our home environment. This study gives one piece of that whole exposure puzzle."