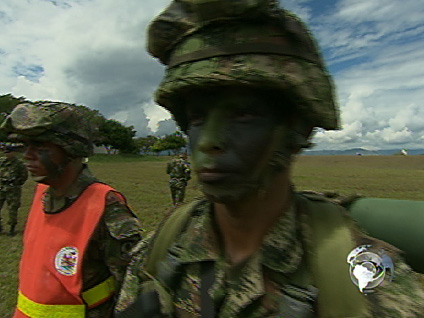 If you've ever received a wedding invitation that includes a deposit slip to the couple's bank account or if you've been a bridesmaid and were asked to go on a diet for the big day, you've probably been in contact with a "Bridezilla."

Author and etiquette expert Gail Dunson, who goes by pen name, Noe Spaemme, has written a book about this scary new breed of brides roaming the earth and she's got some advice for the newly engaged on how to avoid becoming a Bridezilla.

Bridezillas are a new breed of soon-to-wed women who abuse the idea that weddings are their "day." They terrorize their bridal party and family members, make greedy demands and break all rules of etiquette, to insure that they are the single most important person on the planet from the time they are engaged to the time they are married.

Here are a few fleshed-out examples from the book:

As a dozen of us sat there, waiting for dinner to be served, my friend lifted her glass and toasted herself and her boyfriend. "I just wanted to let you all know that Dave and I are getting engaged, just as soon as we have the ring. It's all picked out. It costs six thousand dollars!!"

I received an invitation to a bridal shower for a coworker. Listed on the invitation were the four places the bride was registered for wedding gifts. Additionally, we were requested to bring a bottle of champagne. "OK," I thought, "No problem." Then one of the hostesses called and asked me to bring a dish to pass. "OK," I thought, "No problem." I showed up for the shower with a gift champagne and a dish to pass.

The house looked beautiful. I noticed right away that the only people invited were people from work -- about thirty-three of us -- and the bride's mother.

We played games and had refreshments then the raffle for the champagne: whoever brought a bottle (thirty bottles were brought) got her name put into a raffle for a gift basket containing one bottle of champagne and assorted treats. Come to find out, the rest of the champagne we had brought was for the wedding reception toast. Great idea, I thought. Then the bride opened the gifts, which took over two hours.

After that was over, the hostess got everyone's attention to make an announcement at the bride's request. She said, the bride regrets not being able to invite everyone she wanted, so this is her way of sharing her joy with those who won't be attending the wedding and reception."

When I was asked to be a bridesmaid at my dad's youngest stepdaughter's wedding, it was quite a surprise because I barely knew the girl. I had only met her once - at my father's wedding to her mother. Then when I learned I was going to be her maid of honor, I asked why not her best friend? The bride replied: "She's not pretty enough."

The following are Dunson's top ten tips on taming your inner Bridezilla:

Here is her best advice on getting out of the clutches of a Bridezilla:
Think of it as a child in the middle of a storm, having a tempter tantrum because she can't have a lollipop. One of the methods that I recommend is to walk away, because if there is no audience what's the point? So, if Bridezilla has no audience, who is she going to whine to?

If you are being asked to do something unreasonable, say no. If you don't want to say no right way, get space from the emotion of the moment and say, can I get back to you and refuse later.

Currently, Dunson is planning a sequel entitled "Weddings from Hell." It is about parents of the couples, attendants, guests, vendors, and other people who are involved in the wedding.