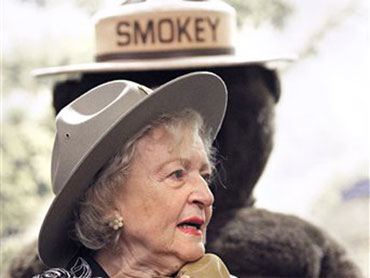 Betty White has had countless roles over her award-winning career, but now she has a gig she's always wanted: "Forest Ranger."

The actress known for her roles on "The Golden Girls" and "The Mary Tyler Moore Show" was made an honorary ranger Tuesday by the U.S. Forest Service. White, 88, said that, as a young girl she wanted to be a forest ranger, but women weren't allowed to have the job.

On Tuesday, the Forest Service presented her with a badge and a ranger's Stetson hat, which she donned during a ceremony at the Kennedy Center. When Smokey Bear arrived mid-ceremony, White gave him a big bear hug and later asked to take the Forest Service mascot with her. She settled for a toy Smokey with its own small hat.

"Wilderness is harder and harder to find these days on this beautiful planet, and we're abusing our planet to the point of almost no return," White said. "In my heart I've been a forest ranger all my life, but now I'm official."

White said some of her first memories as a child are riding in front of her father on a horse into the High Sierras. They would stay for three weeks and never see "another two-legged soul," she said. The family also went camping in Yellowstone National Park. White said her teachers eventually asked that she write essays on topics other than Yellowstone.

White, who recently won an Emmy for her guest-hosting stint on "Saturday Night Live," is in Washington for a ceremony to honor comedian Tina Fey, who is receiving the nation's top humor prize.