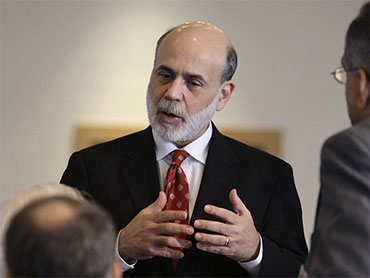 Federal Reserve Chairman Ben Bernanke prodded Congress Friday to enact legislation overhauling the nation's financial regulatory system to prevent a repeat of the banking and credit debacles that had thrust the country into crisis.

"With the financial turmoil abating, now is the time for policymakers to take action to reduce the probability and severity of any future crises," Bernanke said in remarks to a Fed conference in Chatham, Mass.

For its part, the Fed has been taking steps to strengthen oversight of banks, sharpen consumer protections and on Thursday unveiled a sweeping proposal to to make sure they don't encourage top executives and other employees to take reckless gambles.

But Congress needs to step in and close regulatory gaps and make other changes that only lawmakers have the power to do, Bernanke said.

At the top of his list: Congress must set up a mechanism — along the lines of what the Federal Deposit Insurance Corp. does with troubled banks — to safely wind down big financial firms whose failure could endanger the entire system.

And the costs for such a mechanism should be paid through an assessment on the financial industry, not by taxpayers, Bernanke said.

Moreover, Congress needs to set up better systems for regulators to monitor risks lurking in the financial system, he said.

The Obama administration has proposed such action as part of its overhaul of financial rules. Its plan would expand the Fed's powers over big financial institutions but reduce it over consumers. Congress, however, is leery of expanding the Fed's reach because it and other regulators failed to crack down on problems that led to the crisis.

The House is expected to pass legislation by the end of the year, but the Senate is unlikely to consider the bill until early next year.

A House panel on Thursday , creating a federal agency devoted to protecting consumers from predatory lending, abusive overdraft fees and unfair rate hikes. Doing so, however, strips some powers from the Fed.

Bernanke, in his remarks Friday, talked about the central bank's efforts to bolster consumers protections.

He also said the Fed is working on rules to better safeguard consumers from abuses when it comes to overdraft protection, reverse mortgages and gift cards. But he didn't get into a public debate over whether the Fed — or a new consumer agency — is best equipped to do the job.

To beef up banking supervision, Bernanke again said regulators are considering assessing a capital surcharge on big financial companies or requiring that a greater share of their capital be common equity. The Fed also supports efforts for banks to build larger capital buffers in good times and allow them to be drawn down in bad times.

Forceful actions taken by the Fed and the government helped avert a global financial crisis last fall and since then financial conditions have "improved considerably," he said.

But the fallout from the crisis has been severe, reflected in deep drops in economic activity and heavy job losses both in the U.S. and overseas, he said.

The Fed chief didn't talk about the future course of interest rates in his speech or in a brief question-and-answer session afterward.

To nurture the budding recovery, the Fed is expected to keep a key bank lending rate near zero when it meets in early November. Analysts predict rates will stay at record-low levels into part of next year.