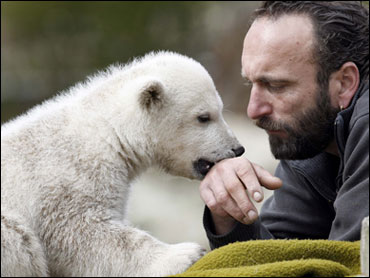 The show is over: The Berlin zoo's fast-growing polar bear cub, Knut, won't be appearing anymore with the keeper who raised him.

The playful pair have delighted audiences since Knut; then an irresistibly cute 20-pound cub; made his first public appearance in late March. Now nearing about 110 pounds, the boisterous bear, which will remain on public view, will have his enclosure all to himself.

"Mr. Doerflein's safety counts first of all, of course," zoo spokeswoman Regine Damm said. The zoo also has Knut's independence in mind, she added, as it prepares the bear to "associate with other bears and not with other people."

Born Dec. 5, Knut has been raised by Doerflein and other zoo staff since his mother rejected him and another cub that died. Knut went on public show March 23.

Doerflein said he remains on hand for Knut, although he will no longer play in public with the growing predator.

"This doesn't mean that I will never play with Knut again; it just means there are no fixed times anymore," he was quoted as saying by the daily B.Z. "I am always there for him. Knut is still a child; he needs me."

Doerflein said, however, that he feels "burnt out" after months of frolicking with Knut, and made clear that he has not always enjoyed being a celebrity in his own right.

"That is the worst thing. People want autographs, to touch me," he said. "When I am with my girlfriend, they invite me (for a drink); when I say 'no,' they get aggressive."