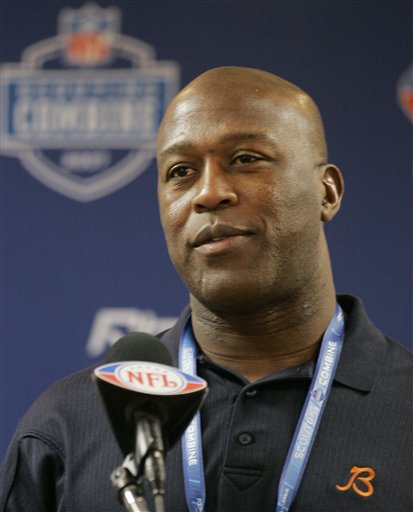 The Chicago Bears decided Lovie Smith was the right coach to lead the team into the next decade _ with hopefully a few more Super Bowl appearances.

A week after Smith's agent said negotiations were so stalled the coach would probably leave after the 2007 season, the Bears signed Smith to a four-year contract extension through 2011 on Wednesday.

The lowest-paid coach in the NFL last season at $1.35 million when he led the Bears to the Super Bowl, Smith's deal will average about $4.7 million per season over five years. He'll make $22 million in new money and the total value of the five years is $23.45 million, the Chicago Tribune reported. Smith was scheduled to make $1.45 million this season in the final year of his initial four-year contract.

The deal was announced by the team Wednesday night, as was an extension through 2013 for general manager Jerry Angelo.

Smith, the 2005 NFL coach of the year, led the Bears to a 15-4 record and their first NFC championship in more than two decades last season before they lost 29-17 to Indianapolis in the Super Bowl.

In Baltimore, Jamal Lewis, whose 2,066 yards rushing in 2003 were second most in NFL history, was cut by the Ravens.

He was one of several players released as teams maneuvered to find salary cap space before the free-agent period starts Friday. However, the Ravens said they are still attempting to re-sign Lewis.

Among the other players cut were Cincinnati linebacker Brian Simmons; Minnesota quarterback Brad Johnson, a 15-year veteran; and wide receiver Eric Moulds, who played for Houston last season after 10 years as a standout with Buffalo.

Washington finished restructuring Mark Brunell's contract, creating more space under the salary cap while ensuring he will return to the team next season.

Dallas re-signed Pro Bowl punter Mat McBriar to a five-year, $8.5 million contract that includes a $2.5 million signing bonus. He led the NFL with a 48.2-yard average, the best in the NFL since 1963. He was also the first Cowboys punter to make the Pro Bowl since Ron Widby in 1971.

The 27-year-old Lewis, the NFL's offensive player of the year after his big season, slipped in recent years and rushed for 1,132 yards last season with just a 3.6 average. His problems were due to injuries and perhaps to a term in prison in the 2005 offseason after pleading guilty to using a cell phone to set up a drug buy.

General manager Ozzie Newsome said the team continues to talk with Lewis' agent, Mitch Frankel, about bringing him back at a lower price.

"There has been good dialogue," Newsome said. "Jamal has been a significant contributor to us in the last seven seasons. It's our hope to have him back with the Ravens."

The release of Simmons by the Bengals was something of a surprise considering the team's weakness is on defense.

The 31-year-old linebacker had spent his entire nine-year career with the Bengals, who made him a first-round draft pick in 1998. He had two years left on his contract for $7 million.

"This was not an easy decision to make," coach Marvin Lewis said. "Brian has been a fine player on the field, and he has been a great example to all of our players as a team leader and a citizen.

"But a new NFL year is about to begin with the start of free agency, and this allows us to best position our team under the salary cap to move forward for 2007."

The 38-year-old Johnson quarterbacked Tampa Bay when it won the Super Bowl after the 2002 season. He played nine of his 15 NFL seasons with Minnesota, which choshim in the ninth round of the 1992 draft, and played for Washington, in addition to the Vikings and Bucs.

After taking over for the injured Daunte Culpepper in 2005 and leading Minnesota to a 7-2 mark, he was a disappointment last year, throwing 15 interceptions and just nine touchdown passes. He was replaced by rookie Tarvaris Jackson for the final two games.

Brunell had been scheduled to count $6.7 million against the cap in 2007, an unaffordable amount for a No. 2 quarterback. He will return as the backup to Jason Campbell, who became the starter midway through the 2006 season.

The New York Jets released running back Derrick Blaylock and defensive end Bobby Hamilton on Wednesday, a person familiar with the moves told The Associated Press.

The source spoke on condition of anonymity because the team hadn't yet announced the moves. Michael L. Huyghue, Blaylock's agent, said the veteran running back could still return to the Jets during the offseason.

Detroit released guard Ross Verba after one season with the team. He played his first four NFL seasons with Green Bay, then the next four with Cleveland and didn't play football in 2005.

During his only year with the Lions, Verba started seven games before a groin injury ended his season.