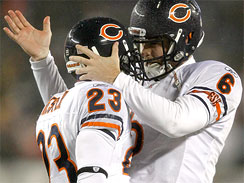 Brett Favre talked his way back into the starting lineup, hoping a snowy Monday night game would be just the setting he needed.

Instead, his surprising return ended all too quickly. A head injury forced him out of the game and may have finished his career, too.

Favre shrugged off a sprained right shoulder to start the game on Monday night, receiving a thunderous ovation from the crowd when he was introduced. But Bears defensive end Corey Wootton slammed Minnesota's 41-year-old quarterback to the ground in the second quarter, and Favre watched the rest of a 40-14 loss from the bench.

Favre was bundled up in a heavy gray coat by the time Devin Hester sped through the snow with his record-setting return.

Hester set the NFL record with his 14th kick return touchdown, running back a punt 64 yards for a score shortly after halftime to help the Bears fly past the Minnesota Vikings on a frosty, hard-hitting Monday night.

Jay Cutler threw three touchdown passes for the Bears (10-4), who last won this division during their 2006 Super Bowl season. Hester caught one of those scoring tosses and also took back the second-half kickoff 79 yards to set up a field goal a few minutes before his game-breaking punt return made it 27-7.

Favre finished 5 for 7 for 63 yards, and the Vikings (5-9) fell apart in front of their proud alumni in town for the franchise's 50th-anniversary celebration featuring all kinds of blasts from the past.

With the Metrodome unusable because of a roof collapse, the game got moved to the University of Minnesota. TCF Bank Stadium was about 80 percent full, with snowballs flying from the seats - sometimes hitting players - and plenty of frolicking in the flakes.

Former Vikings coach Bud Grant jogged around the field at halftime in a short-sleeve purple shirt, getting carried off by some of his former players after an inspired ceremony.

Favre wasn't even supposed to play. His sprained throwing shoulder hurt too much for him to practice this week, and his NFL-record starts streak of 297 regular-season games was already over after sitting out the previous week.

But after feeling better when he woke up on Monday, according to the Vikings, Favre wanted to try. He passed his pregame throwing test and trotted out in front of the Minnesota fans one last time, finding Percy Harvin for a 23-yard TD to give the Vikings a 7-0 lead after the opening drive.

Favre managed one more joyful jump on a teammate's back to celebrate a touchdown, piggybacking right guard Ryan Cook before embracing Harvin and raising his left arm in triumph as he jogged off.

Henry Melton tipped Favre's pass on the next Minnesota possession, Julius Peppers intercepted it at the 14 and Robbie Gould kicked a field goal. The next drive was a three-and-out, and Favre had to hustle back and smother the ball after a high snap slipped through his hands. Cutler zipped a 67-yard pass up the sideline over safety Madieu Williams to a streaking Johnny Knox, and the Bears built a 10-7 lead they never lost.