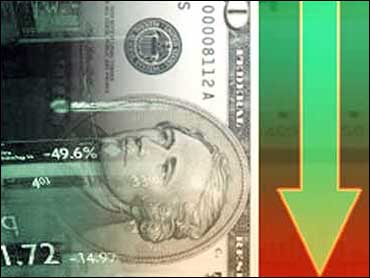 The new job numbers dealt another body blow to the economy and to the hope a recovery is close, reports CBS News Business Correspondent Anthony Mason. As unemployment leapt from 4.5 to 4.9 percent in August, some economists saw a message.

Michael Niemira, Bank of Tokyo-Mitsubishi, said, "The message is that the economy is a lot worse than a lot of people were led to believe."

The drop in the index "increases concern going into the earnings warning season and will keep capital on the sidelines," said Jeff Kleintop, chief strategist for PNC Advisors, which oversees $65 billion.

A bear market is defined as a drop of 20 percent or more in an index. The S&P 500 is down about 28 percent since its all-time high in March 2000, and the bear market's end will only be known once it rises 20 percent. According to BigTrends.com, a Lexington, Kentucky-based research firm, this bear market is the longest in nearly 30 years.

In the past wee, investors pulled more than $10 billion out of stock mutual funds. A new CBS News poll found 77 percent of Americans now view stock investments as risky. That figure was at 67 percent last year.

The big question is, will continuing job cuts further erode consumer confidence? So far, consumer spending has been the only thing keeping the economy above water. "But you can't have the job market deteriorate like this and expect consumers to keep at it," said Merrill Lynch's Saul Steinberg.

Many analysts forecast the unemployment rate will soon pass 5 percent and keep going. The only good news economists could take from the job report is that another rate cut by the Federal Reserve in October is now a foregone conclusion.

©MMI CBS Worldwide Inc. All Rights Reserved. This material may not be published, broadcast, rewritten, or redistributed. CBS Marketwatch and the Associated Press contributed to this report