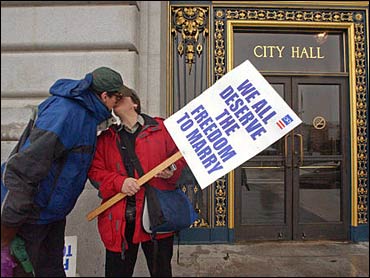 Their wedding march on City Hall produced marriage licenses by the thousands, and now, the honeymoon for gay and lesbian couples who said "I Do" over Valentines Day weekend is at risk of being cut very short, very soon.

Opponents of Newsom's decision will be in court Tuesday, for hearings on their petitions to nullify the weddings that have already occurred and put a stop to any future gay wedding plans.

Going to court to oppose gay marriage are the Campaign for California Families and the Proposition 22 Legal Defense and Education Fund, which is backed by the Alliance Defense Fund.

The ADF, a conservative Christian lobbying group based in Scottsdale, Arizona, has made the campaign against gay marriage one of its key issues - ironically arguing that "there is definitely no national trend toward same-sex marriage" while devoting the bulk of the space on its home page to news bulletins tracking gay marriage cases in various parts of the country.

The two groups opposing the gay marriages both argue that they are a violation of Proposition 22, a ballot question passed four years ago which says that only marriages between a man and a woman are valid in California.

CBS News Correspondent Vince Gonzales reports some experts believe the judge in San Francisco could issue a ruling allowing the marriages to continue while at the same time declaring the certificates to be merely symbolic, without any legal status.

In a brief submitted for a court hearing Tuesday, lawyers for one of the groups seeking to block gay weddings said Newsom was in blatant violation of state law when he ordered marriage licenses for gay couples.

"What the mayor and his cronies have attempted to do is short-circuit the legal process by being both judge and jury themselves," said Alliance Defense Fund attorney Benjamin Bull.

Newsom says he is the one who is obeying the law - because, in his view, the equal protection clause of the California Constitution makes denying marriage licenses to gay couples illegal.

The city's lawyers argue that local government agencies or officials are not barred from advancing their own interpretations of the state constitution. They furthermore claim that the plaintiffs have failed to demonstrate that continuing to issue licenses for same-sex couples would cause the irreparable harm necessary to obtain a court stay.

"There's no harm been shown here, no end of the world scenario," says chief deputy city attorney Therese Stewart, in an interview with The San Francisco Examiner.

The newspaper reports the city is joined in its legal battle by a group of newly married gay couples - including the very first to be wed, Phyllis Lyon, 79, and Del Martin, 83 - who will appeal to the California Supreme Court if the city loses its case.

Most of the gay couples getting married at City Hall are from the Bay Area but about fifty are from other states, including New York, Georgia, Minnesota, Pennsylvania and South Carolina.

Many of the city workers who helped process the licenses during the holiday weekend were volunteering their time.

The city will continue issuing marriage licenses on Tuesday "unless told otherwise by the city attorney," said Mabel Teng, who is Assessor for the city of San Francisco. The pace will slow, however - to only about 30 to 50 licenses a day - because volunteers who were helping out have to return to their regular jobs.

The looming legal showdown didn't deter thousands of people from gathering at City Hall Monday, either to get married themselves or to cheer on beaming newlyweds.

Couples aware that their window of opportunity for marriage might be short stood in the rain, forming a three-blocks-long line outside the ornate building waiting for their chance to make personal and public history.

The steps in front of city hall resembled a raucous wedding reception as newlyweds leaving the building hand-in-hand were greeted with applause and trumpet fanfare. Other couples drove by, honking their horns and waving their freshly minted marriage certificates.

"We really felt that if we didn't make it by today that we wouldn't be able to," said Deb Agarwal, 40, after she and her partner of six years, Diane Pizza, 55, were married by an elected city supervisor, one of the dozens of city officials deputized to officiate at the nonstop nuptials.

"It doesn't matter even if it's a one-day thing because of the precedent," said Tom O'Brien, of Redwood City, who returned to City Hall for the second day in a row so he could wed his partner of four years, Sathit Sapprasert. "It's important that we stand up. Whether this survives the scrutiny is another question."