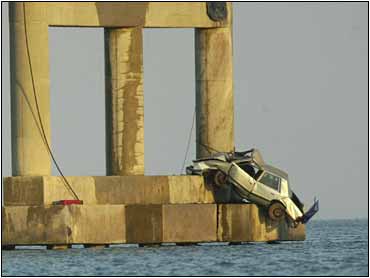 Four loaded barges slammed into the state's longest bridge early Saturday, killing at least five people and plunging cars into the water some 85 feet below. An unknown number of people were missing.

Four people died at the scene when the tug Brown Water V and its barges carrying steel coils and phosphate struck a pillar of the Queen Isabella Causeway, toppling two 80-foot segments of the 2½-mile bridge and cutting off traffic to South Padre Island, officials said.

A fifth person, described as a man in his 60s, was pulled from the water alive but died Saturday afternoon at a nearby hospital, authorities said. The condition of two others who remained hospitalized was not know.

The barges sustained minor damage and did not spill their contents.

Cameron County Sheriff Conrado Cantu said it was unclear how many people were missing, but said as many as 10 vehicles could be submerged in the 50-foot waters. At least 13 people were rescued.

Five vehicles had been located and divers equipped with underwater cameras were taking pictures of license plates to help identify the owners, Cantu said.

"There's a consensus that we're in the recovery phase, not the rescue phase," Cantu said.

Crews were expected to begin pulling vehicles from the water once the damaged pillar was reinforced.

Personnel with the Coast Guard, Texas Parks and Wildlife, and local police and emergency medical teams also were searching the Laguna Madre.

Harlingen resident Rhonda Fife stood near a cordoned off area leading to the bridge, the only thoroughfare connecting the mainland to the island.

Her arms folded, Fife surveyed the damage and said she had not heard from her 18-year-old daughter, Tiffany, since she went with friends to the island Friday night.

"Nobody called and they always call," Fife said, her voice trembling.

Michael Burke, the father of two sons who had gone out with Tiffany, anxiously waited with Fife.

"I just want to know where my kids are at. I hope they're all right and just can't call me," Burke said.

Southwestern Bell spokesman Bill Noble said workers were splicing together fiber-optic lines and erecting microwave towers to restore telephone communication cut from the mainland. Communication on the island itself was not affected.

At least one pipeline carrying fresh water to the island was severed, but the water supply reportedly was not endangered.

Randall Dillard of the Texas Department of Transportation said his agency's investigators, including pecialized diving crews, were inspecting the bridge damage.

The bridge could be out for at least a week while engineers consider ways to repair the structure.

One short-term option, which would take about five days to implement, would be to install a portable bridge to span the 160-foot gap, Dillard said.

"I think there's some contributing factors — current, bad lighting — but we have no reason to believe it was anything but an accident," he said.

The tug boat operator was questioned and passed a sobriety test.

They were loaded in Brownsville and destined for Tennessee, Adams said.

Officials with Brown Water Marine Service, which has operated in Texas since 1987, did not return repeated telephone calls to The Associated Press.

In the meantime, Dillard said the state had hired two boats capable of ferrying 50 people apiece between the island and the mainland.

He said transportation officials were considering bringing a state-owned ferry from Port Aransas in Corpus Christi to transport vehicles to and from the island. The ferry can handle about 20 cars per trip, he said.

The island is perhaps best known as a Spring Break mecca, when crowds of up to 200,000 students arrive, some staying on the island and others in nearby cities.

Area homebuilder Clayton Brashear said thousands of volunteers across the region were due to show up Saturday for Adopt-A-Beach day to help out with island beach cleanup efforts.

The crash comes amid a call for public hearings to discuss building a second causeway to the island.

Many officials have voiced support for a second bridge between the island and Holly Beach. An early draft of a plan was to be presented Sept. 27 at a Texas Transportation Commission meeting in Austin.

Impact studies and public hearings also have received public support from Lucio, who won $10 million in Transportation Department funding for causeway construction during the 2001 legislative session.

By Lynn Brezosky
©MMI The Associated Press. All Rights Reserved. This material may not be published, broadcast, rewritten, or redistributed