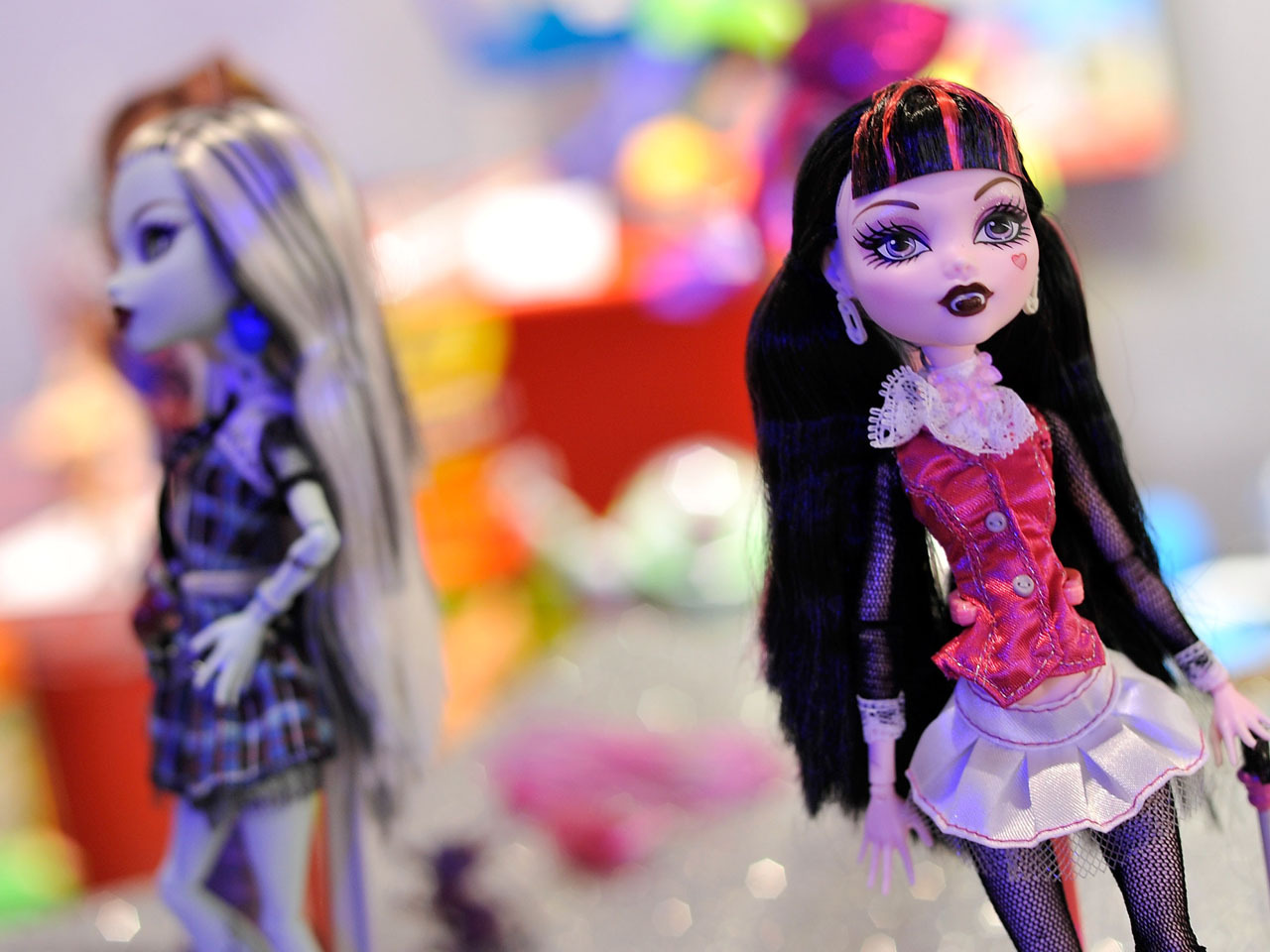 NEW YORK As far as catfights go, this is a doozy.

Barbie, long the reigning queen in the doll world, has suddenly been thrust into the battle of her life.

But Barbie's competitors look nothing like the blue-eyed, blond-haired, long-legged fashion icon. And they don't have the same baggage and old standards of beauty either.

Monster High dolls, vampy teens that are patterned after the offspring of monsters like Dracula and Frankenstein, have neon pink and green streaks in their hair. They wear platform heels and miniskirts with skulls on them. And the dolls that go by names like Draculaura and Ick Abbey Bominable are gaining on Barbie.

In the Maddux household in Portage, Wis., for instance, Olivia, 10, has been playing with Barbie for six or seven years. But she added Monster High dolls to the mix a year ago.

"I look at Olivia and some of her friends and see they're growing out of Barbies," says Olivia's mom, Lisa Maddux, 42, a freelance writer.

That Barbie is losing her edge is no surprise. Since debuting in 1959 as the world's first fashion doll, Barbie has long been a lightning rod for controversy and competitors.

To be sure, Barbie is still No. 1 in the doll market, and the Mattel franchise is worth $1.3 billion. But everything from the growing popularity of Monster High dolls to increased criticism over Barbie's impossibly proportioned body at a time when the average American woman is about a size 14 have led some to question whether the diva has reached her prime.

This isn't Barbie's first brush with trouble, though.

The 54-year-old doll has been forced to evolve with the times, graduating from pinup girl to a range of characters from astronaut to engineer to princess. But detractors have long criticized the 11 1/5-inch doll's frame, which would equate to about a 39-inch bust, 18-inch waist and 33-inch hips on a life-size woman, impossibly top-heavy and tiny-waisted.

In fact, artist Nickolay Lamm on Monday posted pictures of what the doll would look like if it had the average measurements of a 19-year-old, revealing a much more meaty physique. The pictures were featured on websites from CNN to Time and renewed controversy over the doll's effect on girls' body image.

Monster High dolls, on the other hand, although still pretty slim, have a punk rock look that's intended to send the message that being different is OK. And they're aimed at slightly older children, also adding to their appeal.

Monster High has become the No. 2 doll brand in just three years, says Timetoplaymage.com toy analyst Jim Silver. And while Mattel, which makes the dolls too, doesn't break out Monster High figures, BMO Capital Markets analyst Gerrick Johnson estimates the brand is worth more than $500 million in annual sales.

Barbie's audience, meanwhile, is getting younger, which has hurt sales. After all, no child wants to be seen as a baby playing with baby toys.

She's marketed to children that are between age 3 and 9, but over the past 15 years or so, the range has shrunk to around 3 to 6. This has happened because older children are likely gravitating to electronic devices or dolls like Monster High, which are aimed at kids 6 to 13, Silver says.

It's a trickle-down effect: The same reason why 5-year-olds who belted out "The Wheels on the Bus," 25 years ago would today be more interested One Direction boy band pop songs, he says.

"Kids are growing up much faster younger," Silver says. "A 6-year-old is looking for something a little edgier. That's the reason why Monster High has had so much success."

Kim Blake's daughter Sarah, 7, used to be a Barbie fan, but she's moved beyond that. She's getting ready to donate her 3-foot-tall Barbie dream house and about half of her 20 Barbie dolls to charity.

Now, she's more into playing outside or taking Taekwondo martial arts classes and less into dolls in general. That's a switch from her mother, 35, who played with Barbie dolls until she was 13.

"Her girlfriends don't play with them anymore either," says Blake, a store manager in Renton, Wash. "They've actually said the word 'babyish' talking about them."

The last time Barbie wasn't feeling the love was about 12 years ago, when after years of little competition pouty-lipped Bratz dolls became wildly successful. They sent squeaky clean Barbie into a sales spiral.

Bratz dolls were edgy. They wore low-rise jeans, had heavy makeup and exposed navels. And they were sultrier than Barbies. But the Bratz fad faded in 2005, and Barbie slowly regained sales ground.

The same may happen with Monster High dolls. Industry experts say it will take a lot to dethrone Barbie. "It's still one of the strongest brands in industry," says Needham and Co. toy analyst Sean McGowan.

Still, Barbie has faced some tough times lately. The brand's sales have slipped for four straight quarters, even while the overall doll category is up 6 percent year-to-date, according to the researcher NPD Group.

In general, "hot toys" have a cyclical nature, usually with a five-year time span, says BMO Capital's Johnson, ensuring no toy stays on top forever. Even evergreen brands that endure for decades, like Barbie, have highs and lows in popularity.

"It happens with everything -- name a toy, and it's had its ups and downs," Johnson says. "At some point the day comes when a kid says, 'Nah, I'm tired of this.' "

That day isn't completely here for Olivia Maddux yet. Her mom, Lisa, believes her new love affair with the Monster High dolls may have in fact extended the life of Barbie dolls.

"I think the addition of Monster High dolls, aimed at a little different demographic, kept Barbies alive in our place, since she plays with them together," she says.

That may be true. In Olivia's world, the two -- Barbie and Monster High -- peacefully coexist, however. Well, sort of.

"The Monster High dolls are like the Barbie's servants," Olivia says.

Don't get financially shocked by a utility scam

4 things your bank won't tell you when you get a mortgage
View CBS News In
CBS News App Open
Chrome Safari Continue
Be the first to know
Get browser notifications for breaking news, live events, and exclusive reporting.