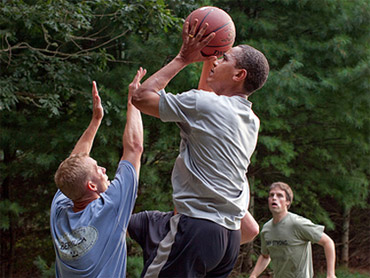 (White House Photo)
Around 5 p.m. today, President Obama will throw on some athletic gear, maybe do some stretching, and hit the White House basketball court for a little pickup.

Among his teammates and adversaries will be Treasury Secretary Timothy Geithner; Secretary of Housing & Urban Development Shaun Donovan; Secretary of Education Arne Duncan; Secretary of the Interior Ken Salazar; and eleven members of Congress. (They're listed here.)

The list of players reflects at least some effort to reach across the aisle -- there are two Republicans coming over from Congress, along with nine Democrats. Conspicuously missing from the list, however, are women. The WNBA's Washington Mystics may play just down the street, but today the White House court will be a woman-free zone.

Asked why no women had made the cut at his daily briefing Thursday, White House press secretary Robert Gibbs said "the point is well taken."

"The president, obviously, is someone who, as someone who is the father of two young daughters, has an avid interest in their competing against anybody on the playing field," he said. Gibbs said the president has played basketball and other sports with women in the past and will likely do so in the future.

Worth noting here: Health and Human Services Secretary Kathleen Sebelius was an accomplished college basketball player – and she took something of a shot at the president's game last night.

Mr. Obama has played basketball at least five times since becoming president, according to CBS News White House correspondent Mark Knoller – though since there's a court on the grounds of the White House, it's impossible to know exactly how often he's gotten in a game. On February 15th, he played at the Chicago Lab School, his daughters' old school, for two hours; a couple weeks later, he played with friends and aides at the Department of the Interior Gymnasium for about an hour and a half. 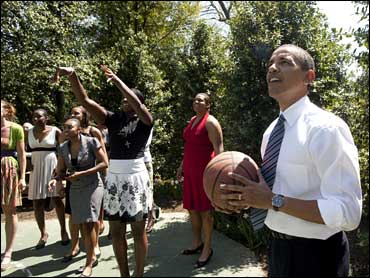 ( )
On May 9th, the president hit the Ft. McNair fitness center to play with personal aide and former Duke National Championship team member Reggie Love and others; in August, while on vacation, he played with aides Bill Burton and Ben Finkenbinder at Blue Heron Farm on Martha's Vineyard (see photo above.) And on September 21st, Mr. Obama went across the street from his Manhattan hotel to St. Bartholomew's Church for a game with Love and other aides.

(An amusing side note: According to Gibbs, the president claims to have, in pickup games in the past, blocked "several of Reggie [Love's] shots." One block was captured by a White House photographer. The president subsequently had that photograph blown up, and then got Love to sign it – presumably grudgingly.)

Past presidents have also had their sporting passions, though Mr. Obama, who also golfs, seems to be the first to bring a passion for basketball to the White House. President George W. Bush golfed for the first two years of his time in office, though he stopped because of the war; Presidents Clinton and George H.W. Bush were golfers as well. President Reagan rode horses; President Carter played tennis. President Ford was both a skier and football player.

According to Sports Illustrated, basketball has helped Mr. Obama forge relationships over the years – and he may be hoping it comes through once again as he pushes members of Congress to pass his health care reform bill. "He won a reputation as a consensus builder while playing recreationally in college and law school," the magazine reports. "A pickup game with [brother-in-law and Oregon State coach Craig] Robinson did nothing less than confirm Obama as a worthy suitor to his wife-to-be. In Chicago, basketball helped him connect with the South Siders he worked with as a community organizer and with the circle of professionals who would help launch his political career." (At left, check out the hip-hop tinged "Barack O-Balla Mixtape," which has more than 440,000 views on YouTube.)

So what might come out of today's game? Steve Tomaszewski, press secretary for Congressman John Shimkus, one of the two Republicans taking the court, said Shimkus expects that "there might be a chance for legislative discussions, but it also might just be a very social event."

"Athletics for him is a stress reliever, and he presumes that's the same for the president," Tomaszewski said of Shimkus, a semi-regular in the House gym, where bipartisan pickup games sometimes take place in the afternoons.

As for why Shimkus is heading to the White House for the game, Tomaszewski had a simple answer.

"You get an invitation to join the president at the White House," he said, "you don't question the activity involved."