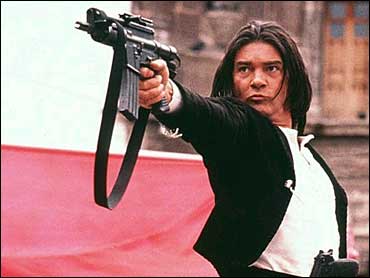 Antonio Bandaras must be vying for the title of hardest-working man in showbiz. He can be seen on the Broadway stage in the Tony Award-winning musical "Nine," and on TV in the HBO film "And Introducing Pancho Villa As Himself."

And he's back in movie theaters, starring as the guitar-toting gunslinger El Mariachi in "Once Upon A Time In Mexico."

The saga of the mythic and musical hero, El Mariachi, continues in Robert Rodriguez's bravura action epic. Rodriguez's notable film debut was shot for a mere $7,000 and catapulted the young filmmaker to prominence, earning him the audience award at the Sundance Film Festival.

The second film, "Desperado," actually began as a bigger-budget remake of the first movie, but grew into a sequel of sorts, incorporating more elaborate action sequences than Rodriguez had been able to execute in "El Mariachi," and making international stars of its two leads Antonio Banderas and Salma Hayek.

Banderas tells The Early Show co-anchor Rene Syler that working with Rodriguez has been a pleasure. "It is like a family business. It is the sixth movie we do both and it's very easy to work in that way," he says. "We don't talk. We look at each other and know what we want. And we feel very comfortable."

Revisiting El Mariachi after 10 years is something Banderas says brought him great pleasure. He says, "It was my first, actually, leading character in America. So I'm very proud to go back there and start working again. You can see us working."

The new adventure is set against a backdrop of revolution, greed and revenge. Banderas explains, "The story is different stories because this time is not only a movie about one character. We have three different characters that are driven."

Haunted and scarred by tragedy, El Mariachi (Banderas) has retreated into a life of isolation. He is forced out of hiding when Sands (Johnny Depp), a corrupt CIA agent, recruits the reclusive hero to sabotage an assassination plot against the president of Mexico, which has been conceived by the evil cartel kingpin Barrillo (Willem Dafoe).

Banderas says, "My character is to move towards a person of revenge. Something horrendous has happened in his life and you're going to discover in flashbacks his position in the movie and almost like a take on 'The Good, The Bad and The Ugly,' but you have to understand on this movie, a lot there is of sense of humor. When you go to the theater, you have to be ready to laugh."

Banderas had recently appeared in Brian de Palma's "Femme Fatale," a role for which he needed long hair, so he was able to play El Mariachi without a wig or hair extensions. Long hair was important, he says, because in the film there is a lot of emotion and he says Rodriguez wanted to convey that with a lot of movement every time the character moved in the screen.

Another film that is coming up for Banderas is the TV version of "Pancho Villa." The actor says the story is based on true events.

"In 1913, Pancho wrote letters to filmmakers in America inviting them just to record, put in film, the revolution and they did," Banderas explains. "W. Griffin committed with him, got paid $25,000 in gold coins and went down to Mexico and shot the revolution, actually. And everything that you're going to see on the screen is actually something that happened, even if it's unbelievable. Some of the stories that happened during that period of time are pretty unbelievable. Totally true."

The busy actor says he is also wrapping up his time on the Broadway hit, "Nine" on Oct. 5. He says, "It is time for me to go away. I don't want to drag myself on the stage. I think it's time. When you go to the theater and it becomes almost like a 'Groundhog Day,' it's time to leave."

Coming up for Banderas is "Imagining Argentina" with Emma Thompson. His HBO film "And Starring Pancho Villa as Himself" premieres Sept. 6.

Born in Malaga, Spain, Banderas attended the School of Dramatic Art in his hometown and, upon graduation, began his acting career at a small theater company based there. He moved to Madrid in 1981 and became an ensemble member of the prestigious National Theater of Spain, where he remained through 1986.

In 1982, Banderas was cast by writer/director Pedro Almodovar in "Labyrinth of Passion," beginning a professional collaboration between the two that would continue through four more films - "Matador," "Law of Desire," "Women On The Verge Of A Nervous Breakdown" and "Tie Me Up! Tie Me Down!" During this time, Banderas also acted in more conventional Spanish dramas including "The Stilts, ""The Pleasure of Killing" and "Baton Rouge."

The international success of "Women On The Verge Of A Nervous Breakdown" and "Tie Me Up! Tie Me Down!" brought Banderas to the attention of American audiences and led to his American film debut in 1992 as a young Cuban musician in "The Mambo Kings." At the time he was cast in the movie, Banderas spoke no English and had to learn all of his dialogue phonetically.

The Mambo Kings provided Banderas with a springboard to significant supporting roles in four major productions in two years, "Philadelphia," "House of the Spirits," "Interview with the Vampire" and "Miami Rhapsody."

His first starring role in an American film was in the 1995's "Desperado," also for Robert Rodriguez. Among his additional film credits are "Never Talk to Strangers," "Assassins," "Four Rooms," "Two Much," "The 13th Warrior," "Original Sin," "Play it to the Bone" and "Ballistic: Ecks vs. Sever."

Ordering Flowers Online: Worth It?