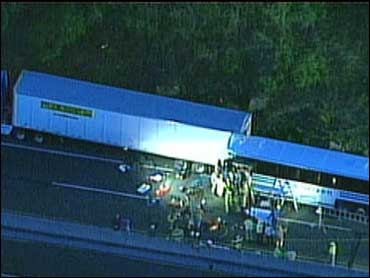 A bus carrying high school students to a band competition collided with a tractor-trailer, injuring many of those on the bus and closing a 10-mile stretch of the Pennsylvania Turnpike for more than two hours early Thursday.

State police and medical personnel at the scene told CBS radio station KYW about 30 people were injured, but most of the injuries appeared to be minor. Some victims were admitted to area hospitals.

The eastbound bus ran into the rear of a tractor-trailer shortly after 4:50 a.m. about seven miles west of the Downingtown interchange in Central Chester County, state police said.

Both eastbound and westbound lanes of the turnpike were closed between the Morgantown and Downingtown interchanges to provide landing areas for helicopters and access routes for emergency vehicles. The westbound lanes reopened about two hours later.

The bus was taking 25 members of the Elizabeth Forward High School drum corps, the school band director and several parents from Elizabeth, Pa., in Allegheny County to the Tournament of Bands Weekend starting Thursday night and going on through Sunday in Wildwood, N.J., said Jane Milner, a school district spokeswoman.