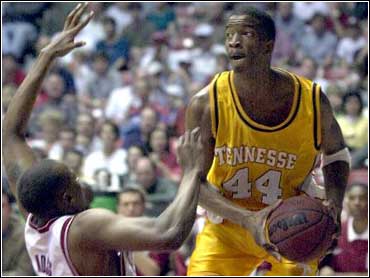 Alabama, beset by injuries most of the season, is suddenly the hottest team in the Southeastern Conference.

Terrance Meade scored 19 points Saturday to help the Crimson Tide knock off a ranked team for the second time this week, beating No. 7 Tennessee 80-75 on Saturday.

"If we hadn't had so many injuries early on, we might be in the NCAA tournament," said Alabama freshman Rod Grizzard, who was one of four Tide players in double figures with 14 points.

Against Vanderbilt on Feb. 22, Alabama was down to just eight players five freshmen and two walk-ons because of injuries. Leading scorer Schea Cotton and three forwards have since returned to the lineup.

The additions have made the Tide the team nobody wants to play now, especially with just one week to go before the SEC tournament.

"Coach has told us not to worry about the postseason, to leave it up to the people who pick the teams," Grizzard said. "But we know if we can get a run going in the tournament, we can do something about it."

But Alabama has yet to win on the road this season the Tide is 0-6 in SEC road games, 0-8 overall and closes the regular season at Mississippi and Mississippi State.

"Certainly we've got it so that no one wants to play us here," coach Mark Gottfried said. "But winning on the road is our next step."

Tennessee (22-5, 10-4), which was seeking a school-record 23rd victory, is tied with No. 9 Florida for the SEC East lead. The Gators play Auburn Sunday.

"We've put our destiny in other people's hands right now," Tennessee coach Jerry Green said. "ecause of this, we now need to depend on other people to lose."

Neither team made a field goal over the final 4:11, turning the game into a free throw shooting contest. Alabama went 8-for-10 down the stretch and Tennessee made just 4-of-10.

Tennessee tied the game at 75 on Ron Slay's two free throws with 1:02 to go. Slay fouled out on the next possession and Grizzard made both his shots to put the Tide up 77-75 with 39.5 to play.

Grizzard fouled Vincent Yarbrough on the other end and Yarbrough missed both shots. C.J Black missed the tip and Meade got the rebound and was fouled. He made both his shots to put Alabama up 79-75.

Tennessee's Jon Higgins missed a 3-pointer at the other end, Alabama's Alfred Moss got the rebound and was fouled. Moss made the first of two shots to seal it with 18.3 to play.

Gottfried said the key to Alabama's surge the past few weeks is the development of his freshmen, especially Grizzard and Meade, two of three freshmen starters for the Tide.

"I think both those two guys have stepped up and made big shots for us lately," Gottfried said. "They have tremendous courage and are not afraid and have gained confidence. They have also accepted the fact that for us to win we need them to make baskets."

Cotton scored 18 points for Alabama and Tarik London had a career-high 14.

The Tide was able to contain Tony Harris and Isiah Victor, who average 15 and 10 points a game, holding them to a combined eight points. Harris was 1-of-9 from the field and Victor was 1-of-5.

"I think you depend on Harris as one of the staples, and when he isn't hitting we try someone else and it just doesn't seem to go in for them," Green said. "Harris had good looks at the goal and it just didn't go in."

The Volunteers were led by Black's 19 points. Slay and Yarbrough each scored 17, although Yarbrough only had two points in the second half.

Alabama, which trailed 41-32 at halftime, opened the second half with a 16-6 run to take a 50-48 lead with 13:25 to play. Alabama eventually pushed its lead to 72-66, its largest of the game, on Meade's 3-pointer with 4:27 to play. Harris answered with his first basket of the game on Tennessee's next possession, cutting the score to 72-68. It was all free throws from there.