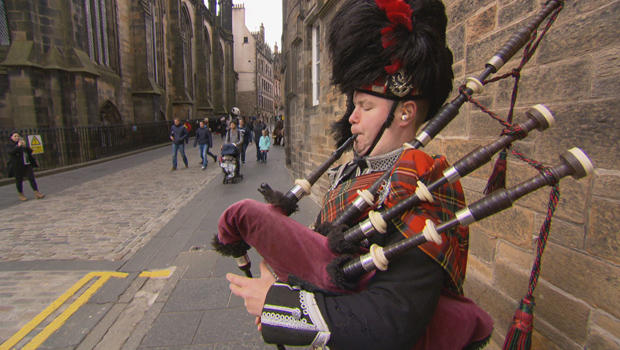 The musical instrument and uniform, devised as instruments of war centuries ago, are today considered the epitome of cool. Jonathan Vigliotti reports:

Every spring, when Scotland thaws and roars back to life, another seasonal tune-up begins.

May marks the start of bagpiping season. (Yes, bagpipers hibernate, too.)

The city of Glasgow's police band is practicing for a summer of competition; and in Edinburgh, the famous castle will soon host hundreds of kilted pipers for the annual military parade, the Royal Edinburgh Military Tattoo.

The bagpipe and kilt were both instruments of war dating back centuries.  The kilt was used as a uniform, and pipers' haunting cries routinely played troops into battle, until after WWI, when more than 500 pipers were killed.

"It is, but intimidating; otherwise they never would have done it," said piper Craig Munro.

He says that intimidating sound comes from air compressed through three pipes, giving this woodwind instrument more punch than a church organ.

Today, bagpipes appear in everything from weddings and funerals, to tribute bands like the Red Hot Chilli Pipers, in which Munro plays.

Vigliotti asked, "Do you ever get people that come up to you and say, 'I'm surprised at how cool bagpiping is'?"

"The public perception is an old man in a kilt with a grey beard, and that's very much changed now, it really has," Munro said.

When he's not playing the bagpipes, Munro's making them. Blocks of rare Tanzanian black wood are shaped, then drilled.

The final step is carefully adding decorative details by hand before assembling … and testing.

Vigliotti gave his all blowing into the pipe."That's hard work," he said. "I need to sit down now!"

Bagpipe business has been booming, and Munro traces it back to 1995, when the movie "Braveheart" ignited interest in all things Scottish.

And that's when kilt maker Robert Mathieson says his business expanded, too.

The traditional kilt is made using eight yards of fabric!

Today's style is only slightly modified from those used on old battlefields. "In those days, it was one piece of cloth, wrapped around your waist and over your shoulder," Mathieson said. "They would sleep in a kilt as well. It could be turned into a sleeping bag."

Today, thousands of patterns are produced in factories around Scotland. Demand comes from all over the world.

Mathieson said, "It wasn't cool to wear a kilt when I was learning the bagpipes."

"Why has it become so fashionable?" asked Vigliotti.

"I think young people are interested in their identity."

That identity has been adopted on red carpets and runways.

Vigliotti asked an age-old question: "Do you wear underwear or not?"

Mathieson replied, "If you're renting from us, you wear underwear!"

It is a personal preference. For Mathieson, the future is for men to get rid of trousers altogether.

Everyone walking down the street in a kilt? "Absolutely," he said. "It would be good for business!"

A business that, along with bagpipes, marches on.  It turns out tradition never goes out of style.