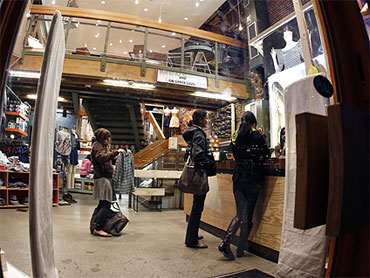 Americans proved in September they are willing to spend, as long as the price and the product are right.

Stores including Abercrombie & Fitch Co., Limited Brands Inc. and Macys Inc. posted strong September sales figures, helped by customers lured to malls by back-to-school discounting. That strength was partly offset by erratic weather in the last week of the month, including a heat wave on the West Coast and tropical storms on the East Coast.

The results are a positive sign that shoppers will be willing to spend during the upcoming holiday season.

"I think the doom and gloom that many of us anticipated for the quarter appears unfounded," said Stifel Nicolaus analyst Richard Jaffe. "Credit goes to the U.S. consumer and the U.S. retailer for sleuthing out what she wants and giving it to her."

The International Council of Shopping Centers' index of September retail sales rose 2.6 percent, near the low end of its forecast that ranged from 2.5 to 3 percent growth.

But the number is stronger than it appears, since retailers were up against year-ago results that were the first positive numbers in a year, making comparisons more difficult.

"Our holiday projections are not for a gangbuster season," Niemira said. "I suspect we'll see something a little better than the September performance during the holidays, but not dramatically better."

A hot August and late Labor Day helped push more back-to-school sales into the month, and a surge in the stock market might have eased shoppers' minds. The S&P 500 rose 9 percent during the month.

"I think retailers are pleasantly pleased by the strength of the back-to-school season," said Ken Perkins, president of research firm RetailMetrics. "It's turning out to be a solid month, which should bode well for the holiday shopping season."

Top performers were stores that offered attractive prices, or unique items that consumers feel are "must have." Bright spots included teen retailers and luxury stores.

"There is a consumer ability to spend, but they need a desirable product, great value or shopping experience that compels them to purchase more than they intended," said Joel Alden, a principal in the retail practice at A.T. Kearney, a management consulting firm.

In the teen sector especially, discounts were steep, particularly at Aeropostale, which offered promotions such as "buy-one-get-one free promotions for jeans and camisoles. Abercrombie & Fitch offered deep markdowns as well.

"Retailers are recognizing there will be a need to discount because consumers expect them, however, their ordering and inventory management has allowed them to build that into their margins a little more," Alden said.

Standouts included preppy teen retailer Abercrombie & Fitch, which has cut prices by 14 percent year-to-date and reaped the benefit: revenue in stores open at least one year rose 13 percent increase, far above the 3.6 percent rise analysts expected. That compares to an 18 percent decline a year ago. Shares jumped 10 percent.

Macy's revenue figure rose 4.8 percent, ahead of analysts expectations of a 3.3 percent gain.

"The back-to-school season has been one of our most successful in years," CEO Terry J. Lundgren said in a statement.

J.C. Penney's revenue in stores open at least one year rose 5.1 percent, ahead of the 3.1 percent gain analysts expected.

Not all stores were winners: Target said sales of food and health care products were strong but clothing sales dropped off in the last week of the month. Its revenue in stores open at least a year rose 1.3 percent in September, missing analyst predictions of a 1.9 percent rise.

The Gap reported revenue in stores open at least one year fell 2 percent, worse than the flat result analysts expected.