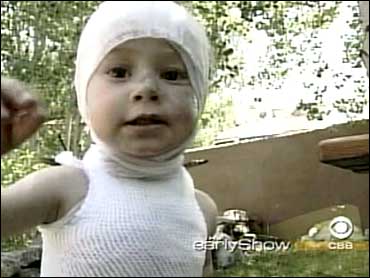 A Colorado toddler is recovering from severe burns after a bizarre accident on an airplane. As correspondent Rick Sallinger of the CBS Denver station KCNC reports, it happened when a flight attendant came around with the drinks cart.

Nineteen-month-old Kai was badly burned when a full pot of coffee tipped off a flight attendant's cart on a U.S. Airways flight from New York to Boston.

"I was obviously in a lot of shock and fear," says his mother, Alexis Karolides. "But I grabbed him and ran up to the front where the flight attendant was. I said, 'Dump the water on him, the cold water on him.'"

That helped cool the burns, but the damage was done.

He was treated by doctors at two hospitals in Boston for first- and second-degree burns on his face, neck and shoulders.

Karolides says, "Of course we have to really be careful about keeping him out of the sun for about a year. We have to apply cream to all his burns and massage them to keep the scarring down."

The airline has issued a statement saying: " U.S. Airways sincerely regrets that this accident happened, and a representative from our consumer relations department is working directly with the family."

Although such occurrences may be rare, this mother is hoping to use her son's tragedy as an opportunity to try to prevent it from happening to others.

She says there was no turbulence when the coffee pot tipped over. "It makes me so sad to think this was an unnecessary accident," Karolides says. "If they could simply put coffee in covered canisters - those thermoses where you have a button to push to dispense a cup - this wouldn't have happen."

While that may seem like a simple solution, some airline industry analysts say it's a costly and unlikely one.

That is little consolation for Kai and his mother. "I think through the scenario and have trouble sleeping," Karolides says.