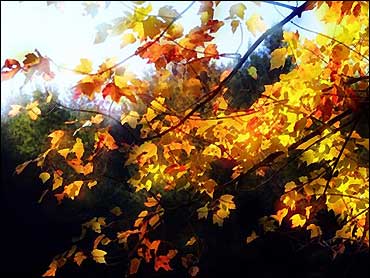 Despite drought, travel fears and a skittish economy, New Englanders are bracing for the annual influx of tourists affectionately known as leaf-peepers.

The burst of autumn's reds and golds have become a multibillion-dollar tourist business in this region. In Vermont alone, for example, tourism officials estimate that fall travelers contribute $1.14 billion to the state's economy annually.

New England hasn't been as hard hit as the Midwest and mid-Atlantic states by drought, and while the lack of rain and the temperature swings have left some larger-than-usual spotty areas of changing colors, experts said the big picture won't fail to impress.

"I've lived in northern New England all my life — I'm 61 years old — and I've never seen a bad foliage year, yet," said Brian Stone, chief of forest management for the state of Vermont.

The peak times vary slightly from year to year, but range from the last week in September in far northern Maine through October, with Columbus Day weekend a prime time in most areas.

The region is still seeing some impact from the Sept. 11, 2001, terrorist attacks. Many foreign travelers canceled their trips last year and Americans from outside New England stayed closer to home.

"European travelers made up 10 to 20 percent of the fall foliage traffic," she said. "That you can still find a room at this time of year is testimony to the fact that the Europeans aren't coming."

Mayne said domestic travelers also have been waiting later this year to plan their vacations. Bookings did not pick up until June or July, she said.

"The weekends are pretty solid, but there are still some vacancies midweek," said Beth Steucek, executive vice president of the 388-member New England Innkeepers Association.

Ray E. Smith, vice president of the Berkshire Visitors Bureau, said leaf-peepers should still heed the warning to plan ahead. "It is very difficult to find a room in the Berkshires in October."

The leaves on all the region's hardwoods will turn as the days shorten. Over the next few weeks, the colors will inflame whole mountain ranges, predicted Bernard Rubinstein, a retired plant physiology professor at the University of Massachusetts.

Rubinstein, a Michigan native, said New England's special combination of showy species of trees and rolling hills allow full enjoyment of the spectacle. He unabashedly calls the autumn display "like nothing else in the world."

"The maples are the big ones," he said. "Their reds and oranges really knock us over."