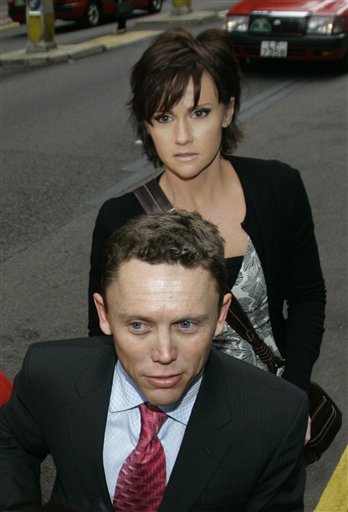 Australian jockey Chris Munce was convicted Thursday of taking bribes in exchange for racing tips and sentenced to 2 1/2 years in prison, casting a shadow over an illustrious racing career highlighted by a 1998 Melbourne Cup victory.

Munce's lawyer challenged the conviction in an animated argument with the judge, although he declined to tell reporters immediately if he planned to formally appeal the result.

John McNamara said Munce broke Hong Kong racing rules that ban jockeys from betting on contests, but that he didn't commit a criminal offense and that the matter should be handled by local racing officials, not in a court of law.

McNamara also argued no one suffered financially from Munce's scheme, calling it a "victimless crime."

"What is alleged, what's been proven doesn't deserve the penalty that would ruin the life of this man and the life of his family," he said.

"What about the reputation of racing? It attracts huge public interest," Browne said.

Prosecutors said during the trial Munce provided tips to Hong Kong businessman Andy Lau 17 times covering races involving 29 horses from December 2005 to May 2006, and that Lau paid Munce through a middleman.

The tips allegedly covered races that Munce raced in.

The middleman, businessman Dinesh Kumar Daswani, was granted immunity in exchange for giving details about the tips-for-bets scheme.

Munce was found carrying a betting slip and $31,994 in cash stuffed in his jeans pockets when he was arrested on July 3, 2006, after meeting with Lau at a hotel, prosecutors said.

The jockey has won many of the biggest races on the Australian calendar, including the 1998 Melbourne Cup on Jezabeel, and Golden Slipper races on Prowl in 1998 and Dance Hero in 2004.