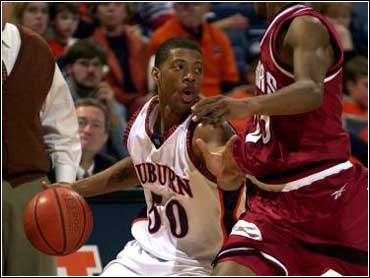 Over the years, Arkansas has used its "40 minutes of Hell" defense to dazzle and frazzle numerous opponents.

On Saturday, Auburn did it to the Razorbacks.

Scott Pohlman scored 13 of his 21 points in a four-minute span of the second half, and 10th-ranked Auburn's defense took care of the rest in a 73-55 victory..

"A lot of times you can see it in an opponent's eyes," Pohlman said. "They didn't have that fierceness. We picked up our defense and shut them down a lot of times, and we fed off our defense."

The Tigers (19-3, 7-2 Southeastern Conference) forced 28 turnovers and held the Razorbacks to four second-half field goals. They started a 30-5 run late in the first half after trailing by as many as 10 points.

"We just turned it up a notch in the second half," Auburn forward Mack McGadney said. "The switch wasn't on in the first half."

"In the first half, it was a clinic of what we were trying to do," Razorbacks coach Nolan Richardson said. "The second half was an example of how not to play basketball."

Arkansas had hit six 3-pointers in a six-minute span of the first half for a 35-25 lead. Then the shots stopped falling, and Auburn scred 35 of the next 44 points.

"You feel like it can't carry on forever, because if it does, you're going to have a tough day," Tigers coach Cliff Ellis said.

The Tigers had the final four points of the half and the first nine after the break.

Chris Porter finished with 20 points, mostly on putbacks and dunks, including a two-handed reverse slam and an alley-oop off turnovers in the final minute. He had four steals.

"When he catches the ball under the basket, he's a man among boys," said Richardson, playing without his biggest starter, 6-foot-8 Joe Johnson.

Porter left after the game for Florida , where Chipola Junior College retired his jersey.

Daymeon Fishback added 11 points for the Tigers, who outscored Arkansas 28-8 in the paint and had 34 points off turnovers.

Teddy Gipson had 12 points, all on 3-pointers, for Arkansas. Alonzo Lane scored 10 points.

The Razorbacks were 15-of-29 from the floor before the break and 4-of-27 afterward.

Auburn committed 15 turnovers in the first half and three in the second.

Both teams were missing key players due to the deaths of grandparents. The Razorbacks played without leading scorer Johnson, whose grandmother died Tuesday. Auburn was without sixth man David Hamilton, who was attending his grandfather's funeral.