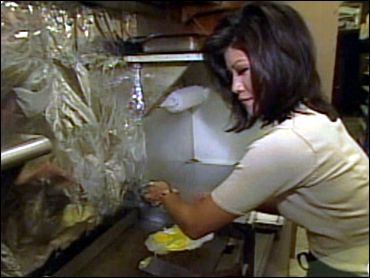 On Tuesday, The Early Show started a special series called "My First Job" giving a glimpse of co-anchor Harry Smith's early employment on a farm. On Wednesday, Julie Chen revisits her roots in Queens, N.Y., where her Saturday mornings were all about service and sandwiches. The following is her report.

I hate to cook, so what am I doing here manning the grill? For the answer, we have to go back in time.

The year was 1985, when Michael J. Fox went "Back To The Future." It was also the year I had my first job, at the Como Deli in Queens.

I was a sophomore in high school. And I had a connection at the deli. My best friend Joann Petz already worked there; her whole family worked there. And I saw it as a fun opportunity to do something with my best friend.

Petz recalls those days, "I had brought Julie in and she had to pay her dues in the kitchen. And I remember the first time I handed her a 20-pound roast beef and she was, like, deer in the headlights - like, what am I going to do with this? She could barely even, like, hold the pan that had to go into the oven."

We were two 15-year-old friends, and for six hours every Saturday and Sunday morning, we were the only two employees on duty.

Working at the deli, I did everything from A-Z. Between working the register, setting up the whole deli counter, making coffee, we did it all there. so it would just be madness.

Petz says, "We'd have these construction guys coming in and we'd be making 12, 24 egg sandwiches at once for these crews."

An example: five buttered bagels, three scrambled, two with ham, pepper only on one, ketchup on the other, 10 coffees, 3 black, 2 light with sugar.

Multitasking in my world started way back then.

But we had some mishaps from time to time.

Petz says, "I think maybe she burned a roast beef once, to a crisp."

We ran in the kitchen and it was so smoky, opened up the oven it was like burned.

I mean, it looked like a science experiment in the oven. It was horrible.

But not as horrible as our memories of this lovely luncheon meat: "Olive loaf was a meat at the deli," Petz says. "And it's, like, the worst thing to cut because you cut that in the slicing machine and olive pieces are all over the place."

"It disgusted her so from that day on it was, like, she refused to cut the olive loaf. It really just grossed her out." Luckily, that was an item that was not very popular at this deli.

For our efforts we were paid $3.50 an hour, a sum that seemed a lot at the time.

I wasn't saving up for a 10-speed bike or college or anything like that. I could buy a couple of albums with that money, a couple of lip glosses.

It's been almost 20 years but the Como Deli remains. I recently visited the new owners and picked up right where I left off, greeting customers and taking orders:

"Can I have a pastrami and mayo sandwich?" asked one girl.

"I'd like an iced coffee, light with one Sweet'N Low," a woman added.

And I even handed out a roast beef that was not burnt; obviously, I did not make it.

My services today were free, but the lessons learned are the same as 20 years ago: Work hard, provide service with a smile, and don't order the olive loaf.-->