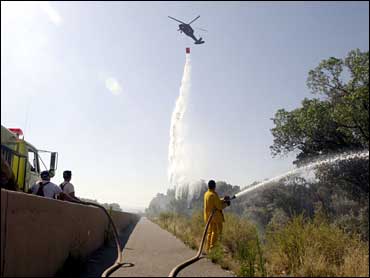 Officials said charges were expected against three people in connection with wildfires that forced evacuations near the Rio Grande this week, while investigators in Arizona said fires there were likely "human-caused."

Meanwhile, three smaller wildfires burned across California on Thursday, the worst one destroying two homes and a shed near Lake Isabella, about 150 miles north of Los Angeles.

Chavez said investigators feel confident they've got "at least one of the fires resolved in that regard." Investigators have not linked the two fires, which burned about a mile apart, but have not ruled out a connection, he said.

Chavez said earlier that investigators were looking for two juveniles who might have set off fireworks that sparked the first fire, and for an adult who may have been responsible for the second blaze.

Albuquerque residents returned to their homes along the Rio Grande on Thursday as firefighters tried to stamp out the remnants of a smoldering blaze that transformed a riverside forest into a patchwork of black and gray.

The suspected arson fire began Wednesday night and scorched about 165 acres. About 200 people were forced to abandon their homes.

The fire was the second in the Rio Grande area in as many days. The first, just to the south, burned about 350 acres after it was started Tuesday. It was 75 percent contained Thursday, fire officials said.

Meanwhile, officials investigating an Arizona wildfire that destroyed about 345 buildings last week when it roared through a vacation hamlet near Tuscon said Thursday that the blaze was human-caused. They had ruled out lightning and other natural factors, but wouldn't say how they believe the fire that devastated the Summerhaven community was started or whether it was intentional.

"We have people we're interested in talking to," said David Conto, a sheriff's fire investigator. "I wouldn't classify them as suspects yet."

The wind-drive fire began June 17 on the 9,157-foot peak northeast of Tucson. Firefighters made progress as they got help from the weather for a second day Thursday; the blaze has charred 32,700 acres, much of it pine forest, but was 50 percent contained.

Meanwhile, the Lake Isabella wildfire, one of the three burning in Southern California, began about 5 p.m. when flames from a house fire spread across about 70 acres, destroying a mobile home and shed. The blaze was 15 percent contained late Thursday night.

Another fire briefly threatened two homes in the Los Angeles suburb of Calabasas; it was 90 percent contained after burning about 25 acres. The cause was under investigation.

A third fire roared through a desert Indian reservation, burning about 350 acres near Palm Springs as Thursday temperatures hit the 100-degree mark. About 400 residents of an evacuated mobile home park were allowed to return by early evening, as the fire was nearly contained.

Authorities believe that fire was started accidentally by burning trash.