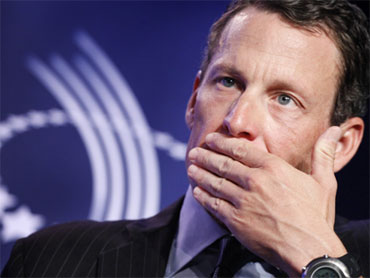 Stephanie McIlvain, also a business associate of Armstrong's, appeared before the jury hearing evidence connected to allegations of doping in professional cycling during a daylong session.

The testimony contradicts claims by Armstrong rivals that he acknowledged using banned substances 14 years ago when he battling cancer.

Bienert said McIlvain had never been pressured by Armstrong or others to lie. She was Armstrong's liaison at sunglasses-maker Oakley during the cyclist's record seven Tour de France victories. Oakley has been a longtime Armstrong sponsor.

McIlvain was present in the hospital room where Armstrong was being treated for cancer in 1996, when former teammate Frankie Andreu and his wife, Betsy, claim the cyclist told doctors he used performance-enhancing drugs.

Armstrong vehemently denies that he cheated — or that he made such a statement — and McIlvain has previously testified in a civil case that she didn't hear Armstrong admit to doping in that conversation.

However, in a phone call secretly recorded by Tour winner and Armstrong critic Greg LeMond, McIlvain seemed to take a more ambiguous stance, saying that she heard the hospital conversation and would testify in a lawsuit if subpoenaed. However, she never said exactly what she heard.

Unauthorized versions of the LeMond-McIlvain conversation have long been available on various cycling websites.

Bienert said McIlvain was truthful when she told the jury that she never heard Armstrong admit that he doped.

"Any comments she made suggesting the contrary were simply gossip, speculation and opinion with people she thought were her friends, like Betsy Andreu," Bienert said.

Betsy Andreu said earlier this month she spoke with Food and Drug Administration agent Jeff Novitzky about Armstrong, but declined to give details.

In an e-mail, Betsy Andreu accused McIlvain of lying under oath Wednesday. "Stephanie not only talked about Lance's use of performance-enhancing drugs with me and Frankie but with many others as well."

She said there will be "overwhelming" evidence to support her claims that Armstrong said he used performance-enhancing drugs.

Armstrong became a more important figure in the probe this spring after disgraced cyclist Floyd Landis dropped long-standing denials and admitted he used performance-enhancing drugs. In doing so, he accused Armstrong and others of systematic drug use. Landis won the Tour in 2006, but was stripped of his title for doping.