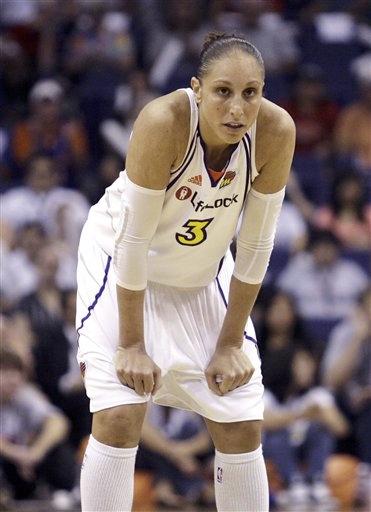 Diana Taurasi insists she did nothing wrong.

The former Connecticut women's basketball star says she hadn't even heard of the banned stimulant modafinil until she found out she had tested positive for it. And no matter what those results showed, Taurasi is adamant that she never used performance-enhancing drugs.

"I've never needed anything to help me. Only thing that I'm guilty of is taking too many jump shots," she told The Associated Press by telephone Sunday night from her parents' home in Chino, Calif.

In her first interview since testing positive in December for modafinil, Taurasi and her lawyer blamed the Turkish lab where the sample was analyzed.

"There's no way I've ever taken anything," she said.

Taurasi is regarded by many as one of the best women's players in the world. She was the first prominent WNBA player to test positive for a banned substance.

Taurasi said she intends to return to the WNBA when the season begins in June. The Phoenix guard has led the league in scoring the last four seasons and signed a multiyear extension with the Mercury last August.

The 28-year-old also plans to play for the U.S. team and coach Geno Auriemma in the 2012 Olympics. She's already helped the Americans win the last two gold medals. Taurasi has talked to Auriemma, who coached her in college, at length since she tested positive. He said he'll stand by her.

"My goal has been to play basketball," she said. "Things have come up in my life, but that's life for you. ... This one was an unexpected one. I've been doing the right thing for my career. I'll take this and move forward.

"I went from being really angry to wondering, 'Why me?' I won't let it bring me down," she said.

Taurasi's contract was terminated by the Turkish club Fenerbahce this month after both her A and B samples tested positive. The Turkish federation still hasn't announced a punishment - the organization was awaiting a response from Taurasi. Her lawyer, Howard Jacobs, said it was delivered Monday. Despite reports of Taurasi's positive test surfacing last month, Jacobs only received the official report from the federation on Wednesday.

Taurasi faces a ban of up to two years and said she will appeal any suspension. The International Olympic Committee bars any athlete given a doping penalty of six months or more from competing in the next games.

"This will be resolved well in advance of 2012," Jacobs said. "My understanding is that we have the right of appeal to the sport of arbitration body in Turkey. That could take a couple of months. All the appeals should be done by the end of this year."

Taurasi said she was at her home in Turkey, on her couch, when the Fenerbahce general manager handed her the paper stating that she had tested positive for modafinil.

Taurasi said the news shocked her.

"I had never heard of it and couldn't pronounce it," she said. "I had to Google it to find out the side effects. I never have come in contact with it."

The drug has been involved in several major doping cases, including that of American sprinter Kelli White, and is on the World Anti-Doping Agency's list of banned substances. Modafinil is used to counter excessive sleepiness due to narcolepsy, shift-work sleep disorder or sleep apnea, according to drug manufacturers.

Jacobs said he's handled about 75 athlete drug cases, including those of Floyd Landis and Marion Jones. He's questioning the lab's handling of Taurasi's sample and pointed out that it had been suspended by WADA.

WADA spokesman Catherine Coley wrote in an e-mail to the AP that the organization won't comment until the case is resolved "in order to protect the integrity of the proceedings."

For Taurasi's part, her lawyers noted she passed a polygraph test and that the Turkish lab was suspended by WADA for three months in 2009. The player's legal team also contends that the lab has failed to properly identify modafinil and that there are questions about the chain of custody for Taurasi's test.

After Taurasi tested positive, two of her teammates in Turkey refused to have their samples examined by that same lab.

"I have the most respect for the testing process. When it's not done the right way, when protocol isn't followed, I do have some problems with it," Taurasi said.

Taurasi is one of many WNBA stars who play overseas in the winter because of higher salaries. The best players can make up to 10 times their WNBA salaries, which top out at about $100,000.

This isn't the first time Taurasi has run into trouble during her career. She served one day in jail and was suspended by the Mercury for two games in 2009 after pleading guilty to a DUI charge.

"The DUI was a mistake I made and I owned up to and I did my time," she said. "That really did help me in the long run growing up as a person. This is different, waking up one morning and having something pinned on you that you had no clue about. It's been a difficult month coming to terms with everything. I know I've never taken it."

Taurasi, who said she's been tested at least three times a year since joining the WNBA, knows that it might be tough to get rid of the stigma that she's doping even if she's vindicated.

"I trust that the truth will come out," she said. "At the end of the day you can try and convince the whole world, but if you know it's true and you've never taken performance-enhancing drugs, that's what you have to live by."