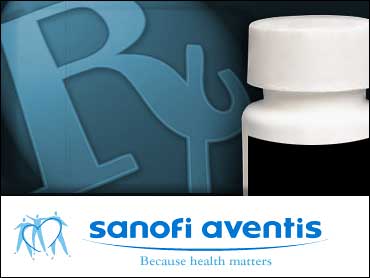 The label of a novel antibiotic will be updated to reflect reports of severe liver problems, including several deaths, associated with its use, the drug's maker and health officials said Thursday.

Sanofi-Aventis' Ketek will carry a bold-type warning about the rare reports of liver failure and severe injury, some of them fatal, in patients treated with the drug. The company also is providing additional information to patients and doctors.

The Food and Drug Administration approved Ketek in 2004. The drug is used to treat respiratory tract infections, bronchitis, sinusitis and community-acquired pneumonia. Both the FDA and Sanofi-Aventis believe the drug's benefits still outweigh its risks.

Through April, the FDA has received reports of 12 cases of acute liver failure, including four deaths, among people treated with Ketek. A fifth required a liver transplant.

"In certain of these cases, it appears there are no other likely causes of liver injury, so it does appear they were linked to the use of the drug," said Dr. John Jenkins, director of the Office of New Drugs in the FDA's Center for Drug Evaluation and Research.

The FDA will continue to monitor the safety of Ketek and take further action if necessary, said a second agency official, Dr. Gerald Dal Pan of the Office of Epidemiology and Surveillance in the drug center.

There have been two further cases of acute liver failure reported since April, though details were not immediately available, Dal Pan said.

The FDA also knows of 23 other cases where patients had serious liver injuries after receiving the antibiotic, which also is called telithromycin.

The rate of reported liver problems associated with the drug is 23 per 10 million prescriptions filled, according to the FDA. In a previously disclosed internal memo, the FDA said the rate appeared higher in comparison with similar antibiotics.

But a study published in January that detailed several of the liver cases associated with the drug may have stimulated the reporting of further problems. That can skew perceptions of the risk of Ketek compared with older but similar antibiotics.

"At this point we cannot conclude the risk is higher than with other antibiotics used to treat these conditions," Dal Pan said.

Dr. Bruce Lavin, vice president of internal medicine for Sanofi-Aventis, said Ketek remains an option needed by doctors when they treat people who are infected with bacteria that have developed resistance to other antibiotics.

The label change comes as the Senate Finance Committee investigates allegations of fraud connected with trials of Ketek, as well as how the FDA has handled safety issues associated with the drug.

"There are questions about whether this drug should stay on the market, and there's great legitimacy to those questions. Ketek is another example where the FDA accommodated a drug maker and turned a blind eye to serious safety concerns," Sen. Charles Grassley, R-Iowa, the committee's chairman, said in a statement.

The updated label for Ketek warns doctors and patients to watch for signs of hepatitis such as fatigue, malaise, anorexia, jaundice and nausea. Patients with signs or symptoms of hepatitis should stop treatment with Ketek immediately and seek a medical evaluation, including liver functions tests, according to the label.

The label was updated to warn of cases of death and life-threatening acute respiratory failure seen in Ketek-treated patients with myasthenia gravis, an autoimmune disorder marked by muscle weakness and fatigue. The FDA knows of three such deaths. Patients with the disorder should not be given Ketek unless other options aren't available, the company said.

This month, Sanofi-Aventis stopped enrolling children in trials of the drug. The company said it had not identified any safety reason that would merit the "pause," but that it wanted to confirm the trial conformed with FDA guidelines.

U.S. sales of Ketek were an estimated $50 million in the first half of 2006, the company said.