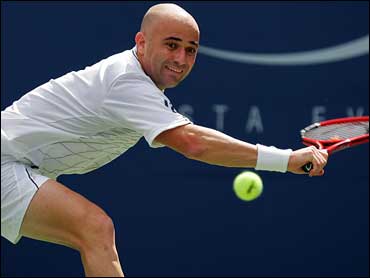 Andre Agassi's upcoming autobiography contains an admission that he used crystal meth in 1997 and lied to tennis authorities when he failed a drug test - a result that was thrown out after he said he "unwittingly" took the substance.

According to an excerpt of the autobiography posted on The Times of London Web site Tuesday, the eight-time Grand Slam champion writes that he sent a letter to the ATP tour to explain the positive test, saying he accidentally drank from a soda spiked with meth by his assistant "Slim."

"Then I come to the central lie of the letter," Agassi writes. "I say that recently I drank accidentally from one of Slim's spiked sodas, unwittingly ingesting his drugs. I ask for understanding and leniency and hastily sign it: Sincerely.

"I feel ashamed, of course. I promise myself that this lie is the end of it. The ATP reviewed the case - and threw it out."

The ATP did not immediately respond to a request for comment.

Agassi retired in 2006. Excerpts from his autobiography, which comes out Nov. 9, are being published this week in the London newspaper, as well as Sports Illustrated and People magazines.

In a story posted on People magazine's Web site Tuesday, Agassi says: "I can't speak to addiction, but a lot of people would say that if you're using anything as an escape, you have a problem."

According to the Times of London Web site, Agassi writes in his book that "Slim" was the person who introduced him to crystal meth, dumping a small pile of powder on the coffee table.

Johnson pointed out this passage from Agassi's book: "As if they're coming out of someone else's mouth, I hear these words: 'You know what, ---- it, yeah, let's get high.'"

"I snort some. I ease back on the couch and consider the Rubicon I've just crossed," Agassi writes.

"There is a moment of regret, followed by vast sadness. Then comes a tidal wave of euphoria that sweeps away every negative thought in my head. I've never felt so alive, so hopeful - and I've never felt such energy."

"I'm seized by a desperate desire to clean. I go tearing around my house, cleaning it from top to bottom. I dust the furniture. I scour the tub. I make the beds."

Among the most successful - and, without a doubt, one of the most popular - tennis players in history, Agassi drew attention not just for his play, but also for his outfits, his hairstyles and his relationships with women, including a failed marriage to actress Brooke Shields.

Agassi's first major championship came at Wimbledon in 1992, and he won a gold medal at the 1996 Atlanta Olympics. But by late 1997, he dropped to No. 141 in the rankings, and he was playing in tennis' equivalent of the minor leagues.

He resuscitated his career in 1998, making the biggest one-year jump into the top 10 in the history of the ATP rankings. The next season, he won the French Open to complete a career Grand Slam, then added a second career U.S. Open title en route to finishing 1999 at No. 1.

In a posting on People's Web site, Agassi says he "was worried for a moment, but not for long," about how fans would react if they found out he used drugs.

"I wore my heart on my sleeve and my emotions were always written on my face. I was actually excited about telling the world the whole story," Agassi says.

A writer from SI first revealed the crystal meth reference on a Twitter posting Tuesday.

According to the Times of London excerpt, Agassi was walking through New York's LaGuardia airport when he got the call that he had failed a drug test.

"There is doom in his voice, as if he's going to tell me I'm dying," Agassi writes. "And that's exactly what he tells me."

"He reminds me that tennis has three classes of drug violation," Agassi writes. "Performance-enhancing drugs ... would constitute a Class 1, he says, which would carry a suspension of two years. However, he adds, crystal meth would seem to be a clear case of Class 2. Recreational drugs." That would mean a three-month suspension.

"My name, my career, everything is now on the line. Whatever I've achieved, whatever I've worked for, might soon mean nothing. Days later I sit in a hard-backed chair, a legal pad in my lap, and write a letter to the ATP. It's filled with lies interwoven with bits of truth."

In 2007, Martina Hingis tested positive for cocaine after a third-round exit at Wimbledon. She denied using the drug but was banned for two years. In July, Frenchman Richard Gasquet was cleared to resume playing after a 2½-month ban upon persuading the International Tennis Federation's tribunal panel that he inadvertently took cocaine by kissing a woman in a nightclub.