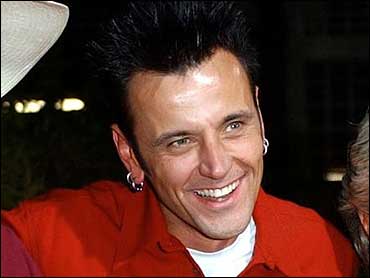 This analysis of "Survivor: All Stars" latest episode is by columnist Greg Feltes of CBS station WBBM in Chicago, who offers weekly commentary on the popular reality TV show.

I blew it as much as Lex did last week.

From what she told Lex, Kathy apparently has the ability to get a million dollars whenever she wants it. Funny, but I didn't see her as the hostage taking type.

Does anyone else think that Lex went over and told Amber that she was getting sent home out of force of habit?

He trusted Rob. I have a feeling that we might see reason #1 repeated a few more times this season.

He made too much of an effort to play the game differently this time around. Sometimes it's better to play it safe. It just seemed like Lex was acting needlessly aggressive for the sake of…well… acting needlessly aggressive. Lex was not in a Jerri, Richard or Rob C. situation. People liked and respected the way he played the first time around, so there was no reason to change.

He eliminated the wrong people, pre-merge. His different type of game play led to the departures of Richard, Colby and Ethan. What he failed to realize is that none of those three had a chance of winning and that each of them would have been bigger targets, come merge time. He could have lasted nine more days if he kept those three instead of Jerri, Kathy and Shii Ann.

He couldn't hold his breath. It's funny how 20 seconds can change the course of the entire game. He HAD Rob beat and then couldn't finish him off. A timely immunity victory could have allowed him to make a major play against Amber or Rob. Instead, he is gone.

8. Kathy: She's toast. Kathy just likely lost the only person who would take her into the final two. This means if she gets to the final three (fat chance), she would have to win the challenge to move on. On top of that, those of you who have downloaded the Survivor Insider clips have seen to what extent Kathy has burned bridges with Rob. Plus, Shii Ann is off the reservation. It pretty much couldn't get any worse. Her sole hope is to win an immunity to buy time to build an alliance with the older tribe-mates who start getting paranoid right around this time every season.

7. Shii Ann: Some people might not be thrilled by her decision to throw a meaningless vote Lex's way, but it was the right thing to do. When you are without an alliance, you have to play the game three days at a time. A vote towards Amber would have only served to alert Romber that she wasn't a team player and that maybe she should go before Kathy. It's all about staying in the game until an opportunity presents itself and having the ability to recognize it. Still, Shii Ann doesn't have that many options. I'd suggest approaching Jenna and Alicia because they are all in similar situations, but they would have to be less confident in Rob then they are now.

6. Alicia: There are 12 days left in the game and I'm not sure she has one rock-solid alliance. The real reason she is still in the game has less to do with strategy and more to do with Chapera's immunity challenge dominance. Rob finally got around to making an alliance with her, but it's becoming more and more obvious that it means nothing. She should jump on the first inkling of a plot against Rob because he is a gigantic roadblock to the final two.

5. Jenna: The preview for next week makes it look like she is gone, which almost certainly guarantees she won't be. However, the preview does point out something that will come back to haunt her down the line: of all the people left in the game, she least deserves to win and everybody is already starting to think like that. Jenna is still in a good position because of Rupert's fierce loyalty to her and her friendship, but it will be very difficult to make the case to the jury that she deserves to win.

4. Rupert: I am not sure that the choice to bring Jenna and Amber as guests to the reward was a wise one. Time alone from the game would have been the perfect time to talk strategy unabated and develop a plan with someone like Rob or Tom. Instead, he made it a girl's night out and got nothing substantive out of the experience. I am also not a big fan of winning anything that forces you to leave camp. It breeds resentment and makes back stabbing really easy for opportunistic opponents. Hopefully, the food and rest will pay off in one or two immunity challenge victories. His best bet is to grab onto Tom and never let go.

3. Rob M: At the surface, the game is shaping up to be his. He already has started the Pagoning of the remains of the former Mogo Mogo. His number two is miraculously still in the game and he possesses a great deal of strength for challenges. Yet, he clumsily handled the Lex situation and it should cost him if he makes it to the final two with Tom or Amber. Lex and Kathy are basically two guaranteed anti-Rob votes, which means he has to get the votes of four of the five remaining players, which isn't going to happen because he is going to have to break some more promises. In the immediate future, he needs to decide who will fill out the fourth slot in his Rob/Amber/Tom alliance.

2. Amber: She will face the same problem as Jenna: explaining why she deserves to win when people are either working harder or strategizing better. This episode at least showed she has some ideas in her pretty little head. She seems a lot more worried about her isolated relationship and multiple alliances than Rob does, which is exactly what her school of thought should be now. Rob's poor handling of the situation has given her two jury votes if they both make it to final two and, if he keeps serving as her hatchet man, it will be a blowout.

1. Tom: If his body holds up and his mouth stays shut, Tom is in a very good position. He has the Lex/Kathy voting block in the jury and both Rob/Amber and Jenna/Rupert want him in their final three alliances. In my opinion, he should go with the latter because there is no way Romber separates at this point, but he looks final three bound either way.

Predictions for next week: After lots of smoke and mirrors, Kathy will be voted out 7-1.