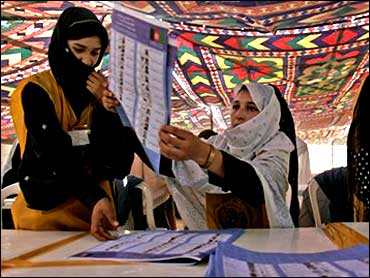 Democracy took another important step forward earlier this week, though you might not have heard about it through the hurricane coverage and the Supreme Court hearings. Afghanistan held its first legitimate parliamentary election since 1969. About six and a half million people, 53 percent of the electorate, turned out to vote for candidates for the 249-seat Wolesi Jirga (People's Council, the lower house of the national assembly, the equivalent of our House of Representatives) and for 34 provincial councils. The election came off with comparatively little violence — 19 attacks leaving nine dead, including the first French soldier to die in the country.

Given the size of the country and the low-tech voting system, the results will not be known for several weeks. It is difficult to make predictions because political parties were banned and all 5,800 candidates ran as individuals. There were some reports of irregularities, but a six-member European Union observer team said that the election was free, fair, and transparent. The best news was the women's vote: 44 percent of registered voters were women, and turnout was high even in former centers of Taliban influence such as Khandahar. 582 female candidates competed for the 68 Wolesi Jirga seats that have been reserved for women.

Naturally, the hard-core oppositionists opposed the election. The Taliban, who vowed not to mount attacks on election day in order to spare innocent lives, nevertheless said the election was not lawful, and any laws passed by the assembly would be illegitimate. They threatened all the elected representatives with violence, and said even losing candidates "would not be safe from [their] bullets." Al Qaeda's number two man Ayman al Zawahiri released a tape calling the election a "fraud," and making similar threats.

However, not all the radicals agreed. This election was noteworthy for the participation of many former Taliban, under the conditions of a general amnesty President Hamid Karzai announced last spring, part of a general national reconciliation program. The amnesty extended even to Mullah Omar, who as one might expect rejected it. Since then Karzai has denied he even made the offer, and the United States still has a $10 million bounty on Omar's head.

The purpose of the amnesty was to bring more Pushtuns — the traditional Taliban base — into the political process, and to divide the opposition. The plan has been effective, but it has also demonstrated that one must develop a tolerance for ambiguity in democratic politics in the developing world. Some people running for office were until recently prime candidates for a vacation at Gitmo. Take for example, Abdul Salam, a.k.a. Commander Rocketi, so named for his skill with the RPG-7 rocket launcher. He used to command Taliban forces in Jalalabad, was in custody for eight months, and now says he wants to bring unity and peace to his country.

More troubling is the candidacy of Maulavi Qalamudin, former head of the Taliban's religious police. Qalamudin's ministry enforced the lifestyle strictures of the Taliban utopia, and he oversaw the systematic application of intimidation, torture, stonings, and other atrocities against Afghans who did not show sufficient ardor in pursuit of the regime's religious ideals. President Karzai released Qalamudin from prison in 2004, and the former Taliban minister is now a strong presidential supporter. He has even reconciled himself to the presence of Coalition forces in the county, saying that they are the only means of staving off civil war.

The Taliban still in the field are not sanguine about their former comrades "selling out" to the regime, which is of course the point of the program. The diehards will never reconcile with the system, they will fight it to the end. But if you ban everyone from the former regime from participating in the political process, those who might make peace are forced into the ranks of the irreconcilables. We have seen similar reconciliation processes in post-Junta Argentina, and post-Apartheid South Africa, where retribution was discarded in favor of compromise and stability. We saw it at home as well — many U.S. politicians from the south in the late 19th century had borne arms against the federal government in their youth.

Perhaps there are limits when dealing with people like Qalamudin, who still points with pride to some of the actions he took as the Taliban's chief inquisitioner. However, allowing him to run was a choice made by the legitimately constituted authority in the country, and something we will have to live with. I hope few voters in Longar Province wanted a return to Qalamudin's "tough love" approach and he will remain a private citizen. I think the Afghan people have outgrown the stage where they want to get stoned.

James S. Robbins is senior fellow in national-security affairs at the American Foreign Policy Council, a trustee for the Leaders for Liberty Foundation, and an NRO contributor.