(AP/CDC)
This story was nothing to sneeze at...

I'm happy to say that I've survived a few days in Mexico City and have none of the symptoms of swine flu. One thing however does feel different; how unconsciously alert I am to my own body and all sorts of warning signs/hazardous behaviors around me. Perhaps it is just a case of biological adaptation to increase your chances of survival in more dangerous environments (if anyone has research on that - please do send my way) or it is a layer of your subconscious that just heightens your peripheral awareness under changing circumstances, but it is oddly cool.

When our producer on the ground welcomed my outstretched hand at the airport with a warning that hand shakes should be avoided, that is when the story started to sink in. Saturday evening when I sneezed at a restaurant and people three tables over turned to look, it sunk in a little deeper.

By the time I woke up on Sunday, my body had gone into this state of being. I noticed a man coughing as he walked into the elevator and instinctively pressed the button with a knuckle instead of a fingertip. I didn't touch the handrails on the way down to the lobby. I took notice of the doorman who sneezed and oddly I searched for him the next couple of days to make sure he still seemed healthy. I washed my hands far more often, became conscious of otherwise unconscious actions like how many times my fingers touched my eyes to relieve an itch(eight times since landing) or how many times I had coughed (three) or sneezed (seven) over the past few days.

I suppose when I return home, I'll stop noticing these things, partly because a third to half the population won't have their face masks on, but perhaps because even the subways of Manhattan will feel relatively threat free, if not clean.

Monday afternoon, I got a call from my producer Tony Cavin. He was a few floors below me, and he said one word: Earthquake. And my response was, WHERE? I remember immediately looking at my window on the 16th floor and noticing the curtains moving on their own, and as my brain told me the air conditioning was off I backed away from the windows and toward the door. I could see another building in the distance. That was enough of a reference point that I began to notice how much our hotel was swaying.

I've lived through rollers during my years in the Bay area, but considering the circumstances, Monday's quake was just surreal. It seemed implausible that there was now a magnitude 6 earthquake shaking a city that was already stirred by a killer strain of influenza.

Honestly, how many times do you ever get to say this with a straight face:

The irony of the earthquake was that it led thousands of people to gather outside their office buildings in crowds, (some with their masks and many without). For days the government had been asking people to avoid crowded areas. 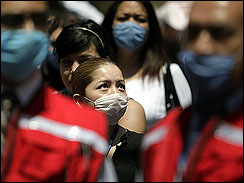 In a city of 20 million, asking someone to avoid a crowd seems naïve at best. Like any other megalopolis, millions of people come into the city each day on public transit. Thousands of buses and subway cars ferry crowds to jobs that they cannot afford to be away from. City officials at one point said that Mexico City had a contingency shut down plan which it would activate if the death toll kept climbing. I'm sure some of it was political posturing because this city would come to a screeching halt if any ban on public transit was ever attempted.

To the government's credit, there are huge portions of the city that are either closed or closing. Restaurants have become take-out only. John Blackstone mentioned in

his piece for the Evening News
that one estimate said Mexico City is losing $57 million a day in revenue. Sports clubs have been closed, as have schools and government agencies.

The riskiest thing I've done for this story so far was the short time I spent outside a hospital where dozens of people were waiting to get in to see a doctor or for their loved ones to come back out. I kept a safe distance from folks, wasn't shaking hands, or kissing anyone on the cheek ;-). No one sneezed or coughed around me and we got out relatively soon. Perhaps the most dangerous thing I'll end up doing for this story is to get on a plane back to the U.S. and spend several hours breathing the recycled air of a couple of hundred other people flying away from ground zero in a confined space.

I've been sitting quietly on the Twitter sidelines for more than a year now, watching the hype and hyperbole about this new medium grow (especially for the past few weeks), but this story finally pulled me into sending my first tweets. Using selective Twitter and Facebook, I was impressed with how many people responded and reacted so quickly. CBS Radio heard that I had tweeted about the earthquake a few seconds after it happened and I was on their air in a matter of minutes. The speed of Twitter is truly an amazing thing.

(So if you're into adding a name to your list, @sreenivasan.)

There will likely be viruses that spring up again, and pharmaceutical company stocks will rally, and travel stocks will plunge as shrewd investors predict behavior patterns and try to time the end of the world. Just do keep in mind, that there are far more people who die of the normal flu every year (35,000 or 36,000 I think according to the CDC) than the numbers we are focusing on in this story. That is not in any way intended to minimize the tragedy for the families of these victims, but sometimes it seems the amplification and dissemination of this sort of news in this hyper-connected era can add fear instead of calm when it is not surrounded by context.