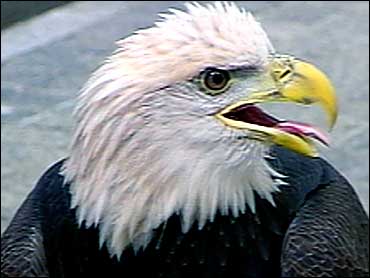 Peter Gros, the co-host of Mutual of Omaha's Wild Kingdom, made a return visit to The Saturday Early Show along with some animal friends, including bear cubs, an eagle and a giant snapping turtle.

Also making an appearance on Saturday was 9-year-old Catie Ricca who assisted Gros, thanks to a wish she made to the Starlight Foundation. Catie, who loves animals, is the proud owner of Babie, a 14-pound, black-haired Cockapoo dog who came along with her to the show.

Gros has been the co-host of Mutual of Omaha's Wild Kingdom since 1985. The program has been honored with 41 major awards, including four Emmy Awards and an endorsement by the National PTA for television programming recommended for family viewing.

The Wild Kingdom co-host has more than 22 years of field experience with captive wildlife. In his former position as Director of Land Animals and vice president at Marine World/Africa USA, he established breeding programs for 377 endangered animals.

He also developed a rehabilitation program for birds of prey, as well as the largest captive breeding colony of ostriches in the United States. He is a licensed Exhibition & Animal Educator for the USDA and an active member of the American Zoo and Aquariums Association. Gros is on the Board of Directors of the Suisun Marsh Natural History Association and the Children's Environmental Trust Foundation, International.

Gros brought the following animals with him to The Saturday Early Show: